An analysis done by Trump's Environmental Protection Agency concludes that the plan would lead to a greater number of people here dying prematurely, and suffering health problems that they otherwise would not have. 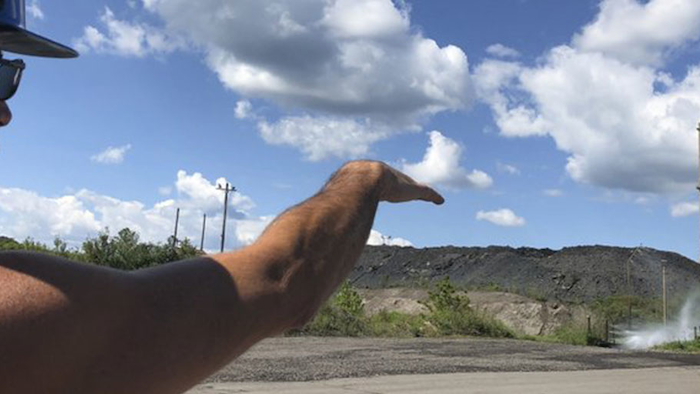 Brian Weekly, a contractor at West Virginia’s Grant Town coal-fired power plant, gestures toward the small facility’s smokestack, Thursday, Aug. 23, 2018 in Grant Town, W.Va. Weekly says opponents of the coal industry are behind warnings of health risks from smokestack emissions under the Trump administration’s plan. President Donald Trump picked West Virginia where he announced rolling back pollution rules for coal-fired power plants. But he didn’t mention that the northern two-thirds of West Virginia, with the neighboring part of Pennsylvania, would be hit hardest. (AP Photo/ Ellen Knickmeyer)

So it was no surprise that President Donald Trump picked the state to announce his plan rolling back Obama-era pollution controls on coal-fired power plants.

Trump left one thing out of his remarks, though: northern West Virginia coal country will be ground zero for increased deaths and illnesses from the rollback on regulation of harmful emission from the nation's coal power plants.

An analysis done by his own Environmental Protection Agency concludes that the plan would lead to a greater number of people here dying prematurely, and suffering health problems that they otherwise would not have, than elsewhere in the country, when compared to health impacts of the Obama plan.

Knotts, a coal miner for 35 years, isn't fazed when he hears that warning, a couple of days after Trump's West Virginia rally. He says the last thing people in coal country want is the government slapping down more controls on coal—and the air here in the remote West Virginia mountains seems fine to him.

"People here have had it with other people telling us what we need. We know what we need. We need a job," Knotts said at lunch hour at a Circle K in a tiny town between two coal mines, and 9 miles down the road from a coal power plant, the Grant Town plant.

The sky around Grant Town is bright blue. The mountains are a dazzling green. Paw Paw Creek gurgles past the town.

Clean-air controls since the 1980s largely turned off the columns of black soot that used to rise from coal smokestacks. The regulations slashed the national death rates from coal-fired power plants substantially.

These days pollutants rise from smoke stacks as gases, before solidifying into fine particles—still invisible—small enough to pass through lungs and into bloodstreams.

An EPA analysis says those pollutants would increase under Trump's plan, when compared to what would happen under the Obama plan. And that, it says, would lead to thousands more heart attacks, asthma problems and other illnesses that would not have occurred.

Nationally, the EPA says, 350 to 1,500 more people would die each year under Trump's plan. But it's the northern two-thirds of West Virginia and the neighboring part of Pennsylvania that would be hit hardest, by far, according to Trump's EPA. 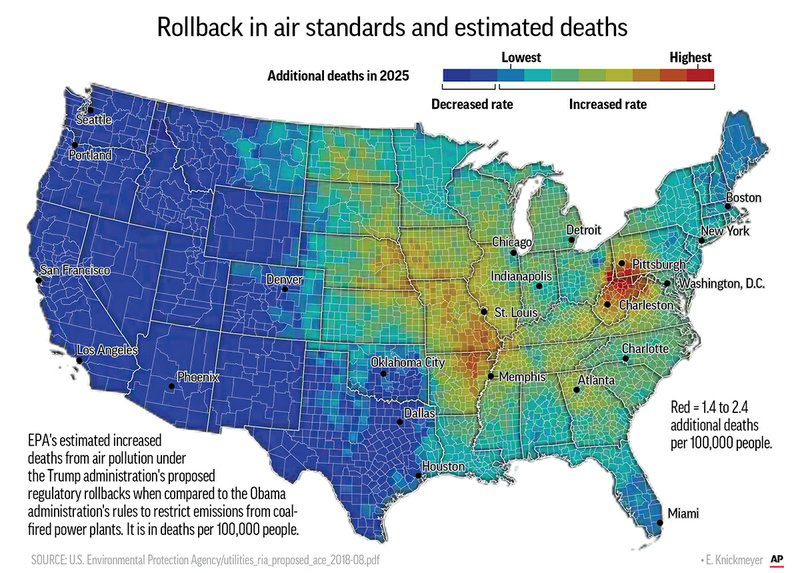 Trump's rollback would kill an extra 1.4 to 2.4 people a year for every 100,000 people in those hardest-hit areas, compared to under the Obama plan, according to the EPA analysis. For West Virginia's 1.8 million people, that would be equal to at least a couple dozen additional deaths a year.

In Washington, EPA spokesman Michael Abboud said Trump's plan still would result in "dramatic reductions" in emissions, deaths and illness compared to the status quo, instead of to the Obama plan. Obama's Clean Power Plan targeted climate-changing carbon dioxide, but since coal is the largest source of carbon dioxide from fossil fuels, the Obama plan would have curbed other harmful emissions from the coal-fired power plants as well.

About 160 miles to the south of Grant Town, near the state capital of Charleston, shop owner Doris Keller figures that if Trump thinks something's for the best, that's good enough for her.

"I just know this. I like Donald Trump and I think that he's doing the right thing," said Keller, who turned out to support Trump Aug. 21 when he promoted his rollback proposal. She lives five miles from the 2,900-megawatt John Amos coal-fired power plant.

"I think he has the best interests of the regular common people at the forefront," Keller says.

Trump's Affordable Clean Energy program would dismantle President Barack Obama's 2015 Clean Power Plan, which has been caught up in court battles without yet being implemented.

The Obama plan targeted climate-changing emissions from power plants, especially coal. It would have increased federal regulation of emissions from the nation's electrical grid and broadly promoted natural gas, solar power and other cleaner energy.

Trump's plan would cede much of the federal oversight of existing coal-fired power plants and drop official promotion of cleaner energy. Individual states largely would decide how much to regulate coal power plants in their borders. The plan is open for public review, ahead of any final White House decision.

"I'm getting rid of some of these ridiculous rules and regulations, which are killing our companies ... and our jobs," Trump said at the rally.

There was no mention of the "small increases" in harmful emissions that would result, compared to the Obama plan, or the health risks.

EPA charts put numbers on just how many more people would die each year because of those increased coal emissions.

Additionally, health studies used by the EPA looked at specific levels of exposure to pollutants and their impact on human health, so remain constant over time, said Schneider, whose group analyzes the EPA projections. 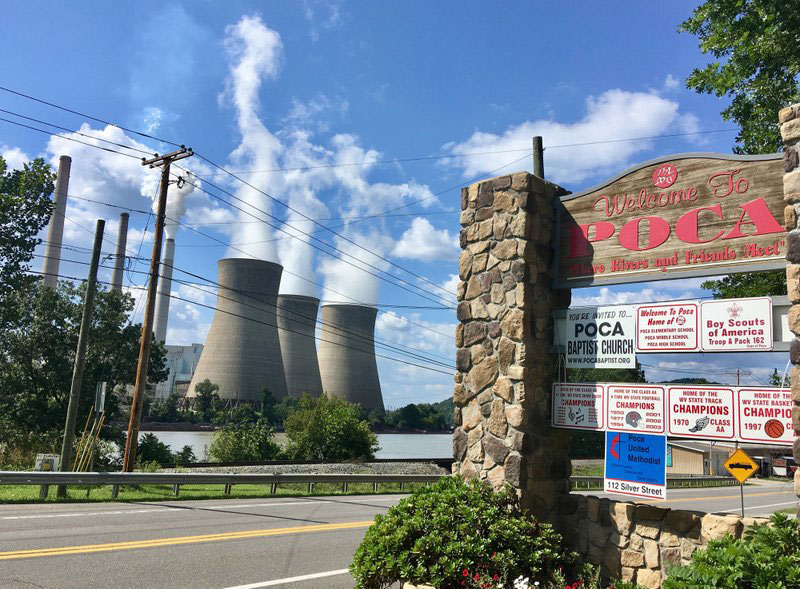 In this Aug. 23, 2018 photo, American Electric Power’s John Amos coal-fired plant in Winfield, W.Va., is seen from the town of Poca across the Kanawha River. President Donald Trump picked West Virginia where he announced rolling back pollution rules for coal-fired power plants. But he didn’t mention that the northern two-thirds of West Virginia, with the neighboring part of Pennsylvania, would be hit hardest. (AP Photo/John Raby)

With competition from natural gas and other cleaner energy helping to kill off more than a third of coal jobs over the last decade, political leaders in coal states are in no position to be the ones charged with enforcing public-health protections on surviving coal-fired power plants, said Vivian Stockman of the Ohio Valley Environmental Coalition.

"Our state is beholden to coal. Our politicians are beholden to coal," Stockman said outside Trump's West Virginia rally, where she was protesting. "Meanwhile, our people are being poisoned."

And when it comes to coal power plants and harm, Schneider said, "when you're at Grant Town, you're at Ground Zero."

Retired coal miner Jim Haley, living 4 miles from the town's coal-fired power plant, has trouble telling from the smokestack when the plant is even operating.

Parked near the Grant Town post office, where another resident was rolling down the quiet main street on a tractor, James Perkins listened to word of the EPA's health warnings. He cast a look into the rear-view mirror into the backseat of his pickup truck, at his 3-year-old grandson, sitting in the back.

"They need to make that safe," said Perkins, a health-care worker who had opted not to follow his father into the coal mines. "People got little kids."