The Obama administration says a new federal rule regulating small streams and wetlands will protect the drinking water of more than 117 million people in the country. Not so, insist Republicans. 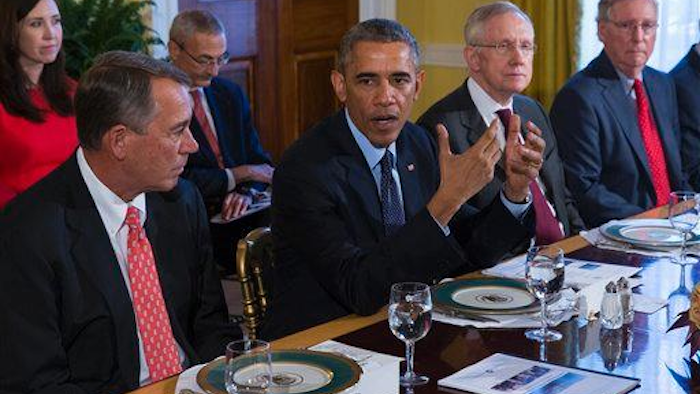 WASHINGTON (AP) — The Obama administration says a new federal rule regulating small streams and wetlands will protect the drinking water of more than 117 million people in the country.

Not so, insist Republicans. They say the rule is a massive government overreach that could even subject puddles and ditches to regulation.

Sen. Shelley Moore Capito, R-W.Va., is promising to "rein in" the government through legislation or other means.

It's a threat with a familiar ring.

What else are Capito and other Republicans pledging to try to block?

— a separate rule setting the first national standards for waste generated from coal burned for electricity.

The rules are among a host of regulations that majority Republicans have targeted for repeal or delay as they confront President Barack Obama on a second-term priority: his environmental legacy, especially his efforts to reduce the pollution linked to global warming.

WHAT HAS OBAMA PROPOSED?

Last June, Obama rolled out a plan to cut earth-warming pollution from power plants by 30 percent by 2030, setting in motion one of the most significant U.S. actions ever to address global warming. Once completed this summer, the rule will set the first national limits on carbon dioxide from existing power plants, the largest source of greenhouse gases in the U.S.

The administration says the rule is expected to raise electricity prices by about 4.9 percent by 2020 and spur a wave of retirements of coal-fired power plants.

The administration also has moved forward on other rules, including the water plan announced last Wednesday. Officials say it will provide much-needed clarity for landowners about which small waterways and tributaries must be protected against pollution and development.

The head of the Environmental Protection Agency, Gina McCarthy, said the rule only would affect waters with a "direct and significant" connection to larger bodies of water downstream that already are protected.

The administration has proposed stricter emissions limits on smog-forming pollution linked to asthma and respiratory illness. Rather than settling on a firm new ozone limit, the EPA is proposing a range of allowable ozone levels that cut the existing level but do not go as far as environmental and public health groups want. The rule is expected to be completed later this year.

In December, the administration set the first national standards for waste generated from coal burned for electricity, treating it more like household garbage than a hazardous material. Environmentalists had pushed for the hazardous classification, citing hundreds of cases nationwide in which coal ash waste has tainted waterways or underground aquifers, in many cases legally.

The coal industry wanted the less stringent classification, arguing that coal ash is not dangerous, and that a hazardous label would hinder recycling. About 40 percent of coal ash is reused.

WHAT DO REPUBLICANS SAY ABOUT THE RULES?

GOP lawmakers criticize the rules as anti-business job killers that go further than needed to protect the nation's air and water supplies and other natural resources.

Sen. James Inhofe, R-Okla., chairman of the Senate Environment and Public Works Committee, said Obama and the EPA are "aggressively pushing an extreme and costly regulatory agenda" that will harm the U.S. economy and everyday life of Americans. His committee "continues to pursue legislation to take aim at EPA's costly and harmful regulations," Inhofe said.

WHAT OPTIONS ARE AVAILABLE TO CONGRESSIONAL OPPONENTS?

Senate Majority Leader Mitch McConnell, R-Ky., has led the charge against the power plant rule, which he says amounts to a declaration of war against his home state, a longtime leader in coal production.

McConnell wrote the 50 governors in March urging them not to comply with the rule, which requires implementation by the states. McConnell has encouraged legal challenges to the rule and recently announced a new wrinkle, telling the EPA's McCarthy that Congress could block the plan by using an obscure section of the Clean Air Act requiring congressional consent for agreements among states.

"The law reads: 'No such agreement or compact shall be binding or obligatory upon any state ... unless and until it has been approved by Congress,'" McConnell told McCarthy at an April hearing. "Doesn't seem ambivalent to me. I can assure you that as long as I am majority leader of the Senate, this body will not sign off on any backdoor national energy tax."

Obama, McCarthy and officials are not backing down. At the April hearing, McCarthy told McConnell that the EPA guidelines are reasonable and give states "tremendous flexibility."

The EPA will produce a rule "that will withstand the test of time in the courts," McCarthy said.

"You're going to have to prove it in court," McConnell said.

"As we most often do," McCarthy replied.

Lawmakers in the House and Senate will continue to hold hearings on the administration's plans and push bills to block the rules or curb spending on them. The GOP-controlled House passed a bill blocking the EPA water rule on May 12 — two weeks before it was officially announced. Bills to block the power plant rule, ozone limits and coal ash regulation have been filed in both chambers.

"We are going to pursue all avenues," McConnell told The Associated Press. "The solution is not right here (in Congress), it's out there — either in the courts or the governors refusing to file plans."

This week, the EPA is expected to propose regulations to cut greenhouse gas emissions from heavy-duty trucks, cutting millions of tons of carbon dioxide pollution while saving millions of barrels of oil.

EPA spokeswoman Liz Purchia said in all its actions, the agency is merely fulfilling its mission to protect the environment.

"Clean air and clean water should not be a political issue," she said. "All sides of the aisle want a clean and safe planet for their children and future generations. We are just doing our jobs — as Congress has directed us, and as courts have affirmed for us — to protect public health and the environment."