The more oil and gas companies pump their saltwater waste into the ground, and the faster they do it, the more they have triggered earthquakes in the central United States, a massive new study found. 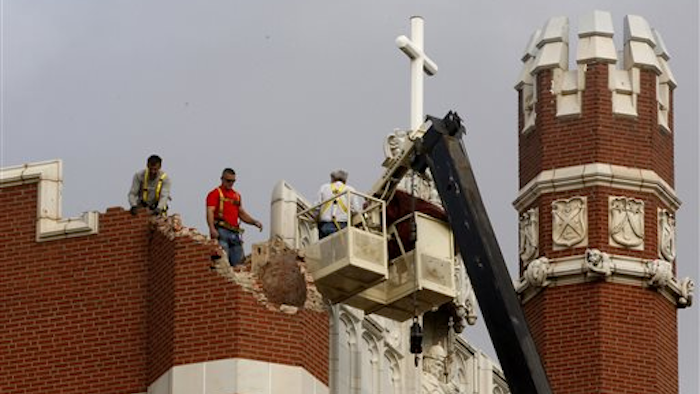 WASHINGTON (AP) — The more oil and gas companies pump their saltwater waste into the ground, and the faster they do it, the more they have triggered earthquakes in the central United States, a massive new study found.

An unprecedented recent jump in quakes in America's heartland can be traced to the stepped up rate that drilling wastewater is injected deep below the surface, according to a study in Thursday's journal Science that looked at 187,570 injection wells over four decades.

It's not so much the average-sized injection wells, but the supercharged ones that are causing the ground to shake. Wells that pumped more than 12 million gallons of saltwater into the ground per month were far more likely to trigger quakes than those that put lesser amounts per month, the study from the University of Colorado found.

Although Texas, Arkansas, Kansas and other states have seen increases in earthquakes, the biggest jump has been in Oklahoma. From 1974 to 2008, Oklahoma averaged about one magnitude 3 or greater earthquake a year, but in 2013 and 2014, the state averaged more than 100 quakes that size per year, according to another earthquake study published Thursday. Since Jan. 1, the U.S. Geological Survey has logged more than 350 magnitude 3 or higher quakes in Oklahoma.

Studies have linked the increase in quakes to the practice of injecting leftover wastewater into the ground after drilling for oil and gas using newer technologies, such as hydraulic fracturing. Recent studies have linked the damaging 2011 magnitude 5.7 quake that hit Prague, Oklahoma, to a nearby high-rate injection well.

Unlike other studies, this new University of Colorado study looked at 18,757 wells that were associated with earthquakes within 9 miles of them and the nearly 170,000 that didn't have any quake links. Looking for the difference between the two groups, researchers determined that it was how much wastewater was pumped and how fast, said lead author Matthew Weingarten.

Even though quake-associated wells were only 10 percent of those studied, more than 60 percent of the high-rate wells — 12 million gallons or more — were linked to nearby earthquakes, the study found.

And of the 45 wells that pump the most saltwater at the fastest rate, 34 of them — more than three out of four — were linked to nearby quakes, the study found.

Physically, it makes sense because "high-rate injection creates much higher pressure over the relative time scale," said study co-author Shemin Ge, a hydrogeology professor at the University of Colorado.

Possible other factors Weingarten and Ge looked, such as cumulative amounts of saltwater injected or depth, didn't show up as significant in the large database.

A different study that just looked at quake-struck Oklahoma, released at the same time in the journal Science Advances, pointed more toward cumulative amounts of liquid rather than high rates. But study co-author Mark Zoback of Stanford said both papers can be right because factors might be slightly different in Oklahoma than elsewhere.

Seismologist Susan Hough of the U.S. Geological Survey called the Weingarten study both compelling and hopeful — hopeful because it means that energy drillers can change the way they inject wastewater and thereby lessen the number of earthquakes.