Five tanker cars of a BNSF Railway freight train that derailed Saturday in western Wisconsin were leaking ethanol into the Mississippi River, the railroad said. 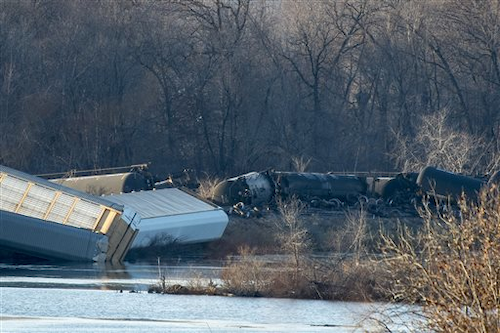 The train derailed about 8:45 a.m. Saturday, around 2 miles north of Alma, a town along the Mississippi, BNSF said. Some of the 25 derailed cars were empty auto racks and tanker cars carrying denatured alcohol, also known as ethanol, the railroad said.

BNSF said the railroad is working to contain the spill, but it didn't say how much ethanol has leaked so far. It said there is no threat to the public. BNSF spokeswoman Amy McBeth said there was no estimate yet on how long the cleanup would take or when the railway might reopen.

A voluntary evacuation was lifted about 2 p.m., according to a Buffalo County sheriff's dispatcher who could not provide his name because of department policy. Highways that also were temporarily closed have reopened, he said.

Up to 150 people left their homes during the evacuation, Chief Sheriff's Deputy Colin Severson said.

Some of the derailed cars were upright, some were on their sides and some were partially in the river, Severson said. Heavy equipment was being brought in to remove the cars, and authorities will assess the damage after the scene is cleared, he said.

BNSF said there were no reports of fire, smoke or injuries. The Federal Railroad Administration will investigate.