A poisonous substance linked to a massive algae bloom off the West Coast has prompted officials to halt recreational shellfishing from Washington to California and is blamed for sickening dozens of seabirds, seals, whales and other marine life. 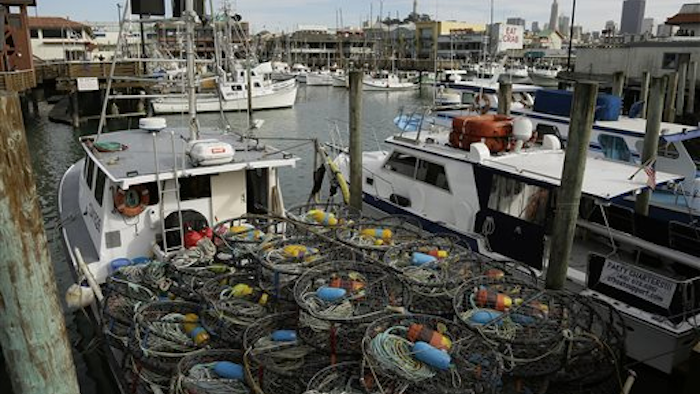 A poisonous substance linked to a massive algae bloom off the West Coast has prompted officials to halt recreational shellfishing from Washington to California and is blamed for sickening dozens of seabirds, seals, whales and other marine life. Below are questions and answers about the issue:

Q: What is the problem?

A: Domoic acid, a naturally occurring neurotoxin, has been found in high levels in a variety of shellfish, which in turn are eaten by predators up the food chain — including humans. Domoic acid poisoning can cause vomiting, seizures and, in severe cases, coma and death. No recent human illnesses have been reported, however.

Q: What are authorities doing about it?

A: On Thursday, California wildlife authorities closed the year-round rock crab fishery north of the Santa Barbara-Ventura county line and delayed the start of the recreational Dungeness crab season, which was to begin Saturday. There's also a chance that the Nov. 15 start of commercial fishing will be pushed back until it's determined the domoic acid levels in crabs are once again at safe levels. Oregon state officials issued an advisory this week for all recreationally caught crab along the state's southern coast, from south of Coos Bay to California. The commercial season there doesn't begin until Dec. 1.

Q: Could I get sick from eating store-bought or restaurant shellfish?

Q: What will be the impact on commercial fishing?

A: Potentially, disastrous, depending on whether and how long it will be off-limits. The commercial Dungeness crab take from Washington, Oregon and California has been cyclical, ranging from 8 million to 54 million pounds a year. But it remains one of the West Coast's most valuable fisheries, according to the Pacific States Marine Fisheries Commission. California's annual take alone is worth an estimated $60 million, according to state fish and wildlife officials. A delay in commercial catching would come at a bad time for small fishing outfits because they make a lot of their money supplying crabs for Thanksgiving and Christmas tables.

Q: What is causing the high levels of domoic acid?

A: Domoic acid is produced by the plankton species Pseudo-nitzschia, which is eaten by shellfish and some fish. The high levels found in shellfish can be traced to a vast algae bloom off the West Coast, which has seen unusually warm ocean temperatures as a result of El Nino, said Jordan Traverso, a spokeswoman at the California Department of Fish and Wildlife. Such blooms are cyclical, but this summer surveyors aboard a National Oceanic and Atmospheric Administration research vessel said the bloom was one of the largest ever observed on the West Coast. The ribbon of microscopic algae, up to 40 miles wide and 650 feet deep in places, now stretches from at least California to Alaska.

Q: Could climate change be causing the problem?

A: Researchers aren't sure whether there's a connection, although they say the algae blooming cycles may be more extreme because of warm-water changes. "There's no question that we're seeing more algal blooms more often, in more places," Pat Glibert, professor at Horn Point Laboratory, University of Maryland Center for Environmental Science, said this summer. "When they do occur, they're lasting longer and often over greater geographical areas. We're seeing more events than documented decades ago."

Q: Are other species affected?

A: Warm-water algae blooms aren't the only problem threatening marine life. A report published late last month in Science magazine said the rapid warming of waters off New England is a key factor in the collapse of the region's cod fishery. Warming waters also have been blamed for the collapse of the lobster fishery in Connecticut and Rhode Island. The northern New England lobster population is booming while the southern stock struggles. Warming waters also are blamed for an influx of black sea bass off of Maine and New Hampshire that fishermen say prey on lobsters there.