A massive ball of flames engulfed an oil platform in the Gulf of Mexico on Wednesday, killing four people and sending terrified workers jumping into the sea. 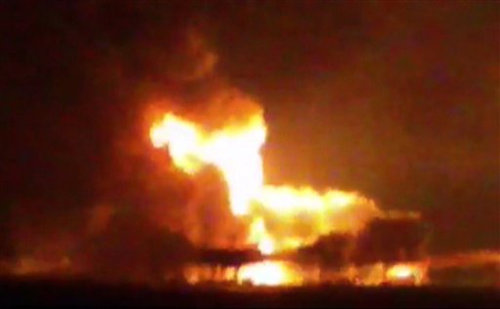 MEXICO CITY (AP) — A massive ball of flames engulfed an oil platform in the Gulf of Mexico on Wednesday, killing four people and sending terrified workers jumping into the sea.

State-run oil company Petroleos Mexicanos, or Pemex, said there was no evidence yet of a major oil spill following the blast, which injured 16 workers, two seriously, and forced the evacuation of 300.

Fleets of helicopters ferried workers with bandaged hands and faces, and burn marks on their overalls to the nearby city of Ciudad del Carmen, where crowds of concerned relatives of oil workers thronged outside hospitals.

A survivor of the blaze on the shallow-water Abkatun Permanente platform in the Campeche Sound said workers "jumped into the sea out of desperation and panic."

"There was nothing you could do but run," said Roger Arias Sanchez, an employee of Pemex contractor Cotemar who escaped the burning platform in an evacuation boat.

President Enrique Pena Nieto said the causes of the accident are under investigation.

Pena said he had issued orders "to carry out the appropriate investigations to find whoever is responsible, but above all, to avoid this type of accident in the future."

On its Twitter account Wednesday afternoon, Pemex raised the death toll from one to four. Many of the injured appeared to be Cotemar employees.

Pemex's media office said it was unclear whether any significant amount of oil had spilled from the Abkatun Permanente platform, which largely serves to separate gas, oil and other petroleum products, and pump them to refineries onshore.

Previous spills from Mexican facilities had usually occurred at active offshore wells, not processing stations such as Abkatun.

The Abkatun platform lies off the coast of the states of Campeche and Tabasco. It is further out to sea than the platform involved in the last severe fire in the area, the 2007 fire at the Kab 121 offshore rig.

That accident was caused by high waves that hit the rig, sending a boom crashing into an oil platform's valve assembly. The blaze killed at least 21 workers and the rig spilled crude and natural gas for almost two months.

Mexico's worst major spill in the Gulf was in June 1979, when an offshore drilling rig in Mexican waters — the Ixtoc I — blew up, releasing 140 million gallons of oil.

It took Pemex and a series of U.S. contractors nearly nine months to cap the well, and a great deal of the oil contaminated Mexican and U.S. waters.

Pemex has had serious security problems in the past, mainly in its onshore pipeline network, where thieves drilled around 2,500 illegal taps in the first nine months of 2104, and stole more than $1 billion in fuel.

That problem got so bad that in February, the company announced it would no longer ship finished, usable gasoline or diesel through pipelines.

That apparently hasn't stopped the thieves, though. On Wednesday, federal police announced they had seized three tanker trucks and 148,000 liters (39,100 gallons) of stolen fuel at several different sites throughout the country, as well as locating two illegal pipeline taps.