Mexico's state-run oil company continues to search for three missing workers from a platform fireball that killed four others, while beginning to restore production at the damaged Gulf of Mexico facility, officials said Sunday. 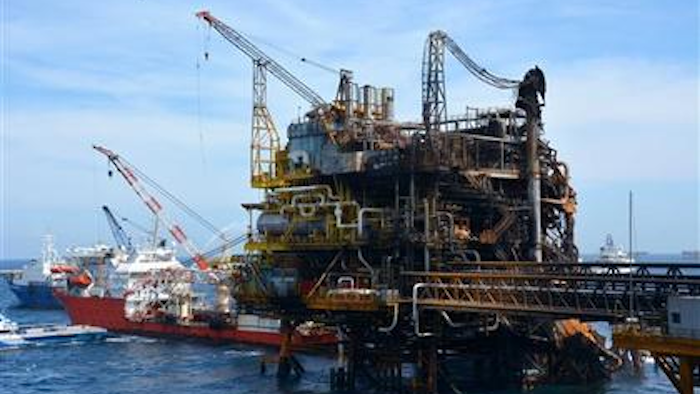 Petroleos Mexicanos, or Pemex, will start processing 170,000 barrels of crude by Monday and expects to restore 80 percent of the pre-fire production in the coming week, said Gustavo Hernandez, general director of exploration and production.

The Abkatun platform was handling 220,000 barrels of crude when a fire hit on Wednesday, causing the evacuation of 301 workers, some of whom were forced to leap into the sea to escape the flames. Some 45 people sought medical attention, according to Pemex statistics shown in a press conference.

Hernandez said the accident, whose cause is still under investigation, won't affect production projections from that region of the gulf of 646,000 barrels of crude a day and 1.4 billion cubic feet of gas.

He said the Navy continues to help in the search for three missing workers, one from Pemex and two from the contractor, Cotemar.

"The effort won't stop until we find them," he said.

The Abkatun A platform largely serves to separate gas, oil and other petroleum products, and pump them to refineries onshore.

Pemex said it managed to avert any significant oil spill because the fire happened on a processing platform where the feeder lines could be turned off, rather than at an active oil well with a virtually unlimited amount of fuel flowing up from the seabed.

The Abkatun platform lies off the coast of the states of Campeche and Tabasco. It is farther out to sea than the platform involved in the last severe fire in the area, a 2007 blaze at the Kab 121 offshore rig.

That accident was caused by high waves that hit the rig, sending a boom crashing into a valve assembly. The blaze killed at least 21 workers and the rig spilled crude and natural gas for almost two months.

Mexico's worst major spill in the Gulf was in June 1979, when an offshore drilling rig in Mexican waters, the Ixtoc I, blew up, releasing 140 million gallons of oil. It took Pemex and a series of U.S. contractors nearly nine months to cap the well.

Hernandez said the Abkatun fire won't affect international confidence in Pemex just as the company is its first rounds of bidding after the country's energy reform, which opened Mexico's oil sector to foreign investment.

On the contrary, he noted that the fire was out in 16 hours and workers were able to return to the installation almost immediately.

"The incident showed that our security systems and emergency-response plans worked," Hernandez said.