Saltwater, or brine, is an unwanted byproduct of oil production and is considered an environmental hazard. 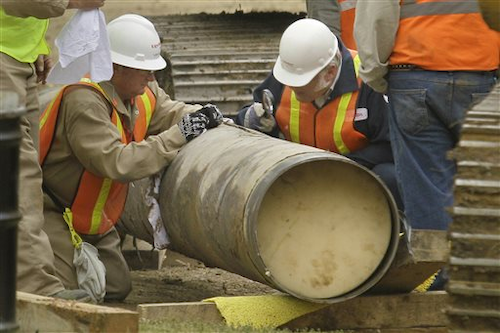 A 63,000-gallon saltwater spill that leaked from an underground pipeline entered a lake via a tributary in northwest North Dakota, a state Department of Health official said Wednesday. He said the spill will not affect

any drinking water in the area.

Water Quality Director Karl Rockeman said it's unclear how much of the saltwater has entered Smishek Lake near the town of Powers Lake, which is about 75 miles northeast of the oil boomtown Williston. Saltwater, or brine, is an unwanted byproduct of oil production and is considered an environmental hazard by North Dakota. It is many times saltier than sea water and can easily kill vegetation.

The most recent spill is "significant," Rockeman said, but it still pales next to a massive pipeline spill in January that leaked nearly 3 million gallons of brine, some of which reached two creeks and the Missouri River. Officials have said cleanup of that spill could take from several months to years.

Oasis Petroleum, which owns and operates the pipeline, is responsible for cleaning up the spill and has been at the site along with crews from the state Department of Health and the North Dakota Oil and Gas Division.

In a statement, Oasis said it was notified of the leak from its North Cottonwood pipeline on Monday and by 4:30 p.m. had found the source of the leak and stopped the flow. No injuries have been reported.

The company estimates that about 1,500 barrels of saltwater were released from the underground pipeline, which is almost 2 miles from Smishek Lake. It said preliminary field test do not indicate any adverse effects to the lake itself or its aquatic life.

About 4,000 barrels of liquid have been recovered from the area, but that amount includes fresh water and salt water, Rockeman said. It's unclear how much saltwater has been recovered.

The spill was initially reported to the U.S. Environmental Protection Agency via the National Response Center. The EPA has not yet responded to a call for comment.