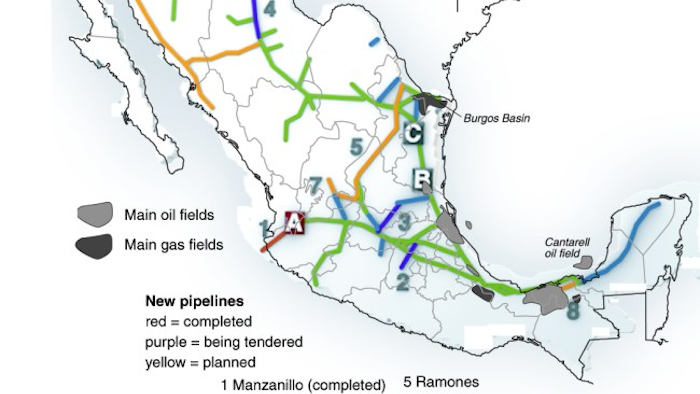 HOUSTON — The recent opening of the Mexican upstream energy industry, combined with access to abundant U.S. natural gas feedstock from Texas, is driving significant energy infrastructure investment on both sides of the border. That infrastructure, along with planned access to more competitively priced electricity promised by the reforms, is breathing potential for new life into the Mexican petrochemical industry, which has long relied on imports to meet its domestic needs, according to new analysis from IHS (NYSE: IHS), the leading global source of critical information and insight.

“After 15 years of stagnation, with no new petrochemical production capacity installed in the country and several plant closures, the Mexican petrochemical industry has been overdue for investment and has had to rely heavily on raw material imports to meet its need for local production of many chemicals,” said Rina Quijada, Ph.D., senior director, Latin America, at IHS Chemical. “In 2014, Mexico imported nearly U.S. $24.5 billion in chemicals and petrochemicals to meet its domestic needs, according to ANIQ, Mexico’s petrochemical industry association. However, for some chemical value chains, such as polyethylene, the import gap is more dramatic. Last year, Mexico had to import approximately 1.5 million tons of this widely used plastic, which is about 75 percent of the country’s polyethylene demand,” she said.

Quijada said that new production capacity is expected to start up by the end of 2015, reducing import demand for PE in 2016. That ethylene/polyethylene project, which is a joint venture effort between Brazilian-based Braskem and Mexican-based IDESA, is located in the state of Veracruz, and will use ethane as feedstock. “This new site should be highly competitive” Quijada said. “Mexico needs more of this type investment, and we at IHS Chemical anticipate growth in production capacity of petrochemicals once additional feedstock is available in the next five to eight years.”

The changes in Mexico’s energy policy are already driving private investment in the energy infrastructure necessary to transport U.S. natural gas to Mexico,” Quijada said. “For Mexico, that gas means access to abundant, competitively priced feedstocks for petrochemical production. Just as important, it can be used for production of reliable, cost-competitive electricity, which is absolutely essential to grow the entire manufacturing base in the country and to making Mexican petrochemical production cost competitive.”

Mexican energy reform is driving billions of dollars in planned midstream investment, as private and state-owned companies seek access to abundant natural gas production available from key U.S. energy plays, including the Texas powerhouse known as the Eagle Ford shale, which extends from South Texas into Mexico. The Los Ramones (Phase I) pipeline, which came online last December, added an impressive 2.1 billion cubic feet (BCF) of natural gas per day of import capacity from Texas. Additional projects totaling 3.45 BCF per day of cross-border natural gas capacity are under development, and once online, will significantly increase gas availability in Mexico.

“These pipeline investments are needed to connect the regions that don’t currently have access to natural gas,” said David Crisostomo, a natural gas and power analyst at IHS Energy. “As a result, fuel-oil generation is still being used in regions such as the northwest, which is more costly than gas. This means Mexican consumers and manufacturers pay more for electricity when compared to their U.S. neighbors. Access to more affordable power will not only enable the petrochemical industry to grow and flourish, but also many other industries, such as automotive and consumer goods production.” he said. “The process will take some time, but the impacts for the Mexican petrochemical industry, the manufacturing base, and the economy will be positive, and the power sector is pivotal to this success.”

The chemical industry is very important for Mexico’s economy and the country currently relies heavily on imports to meet its need for many chemicals. In 2014, it accounted for close to 12 percent of manufacturing, according to the National Institute of Statistics and Geography (INEGI). However, manufacturing growth in Mexico is hampered by a lack of reliable supply of competitively priced electricity necessary for manufacturers to add production capacity in the country.

According to IHS Energy, Mexico has the third highest amount of oil reserves in Latin America, relevant natural gas reserves, and in 2013, was ranked number 10 on the list of the top hosts of foreign direct investment inflow by the UN Conference on Trade and Development. However, the absence of relevant investment in petrochemicals has caused Mexican production figures to grow just marginally during the last couple of decades, while imports of chemicals have grown steadily.

“This lack of investment in the petrochemicals sector is due, in part, to two key challenges faced in the past by the national oil company Petroleos Mexicanos (PEMEX),” said Raul Alvarez, a consultant with IHS Chemical. “First, significant fiscal burdens were imposed on the company, which severely hampered PEMEX’s ability to invest in major downstream projects outside of E&P. Second, the resulting lack of economic and technical resources in Mexico led to the company’s unsuccessful efforts to reverse a steady decline in oil production, which peaked in 2004, and meant it was unable to develop its most promising hydrocarbon basins.”

Consequently, for a long time with few exceptions, (such as Braskem/IDESA’s ethylene and polyethylene project), Alvarez said, PEMEX has been unable to engage in long term, competitive feedstock/basic petrochemicals supply commitments for petrochemical projects.

Trade statistics show that organic chemicals are the most important group of chemicals being imported by Mexico (organics account for close to 85 percent of total chemical imports), and capacity gaps exist today across and along diverse petrochemical value chains. Styrene, paraxylene and cyclohexane are just three examples of petrochemicals that Mexico demands and imports in significant quantities. The list goes on further downstream, as demonstrated by imports of plastic resins, such as polymers of ethylene, polymers of propylene, polymers of vinyl chloride and engineering plastics. The irony that such capacity gaps often pose can be further illustrated by using styrenics as an example:

In the mid-1990’s, production of consumer products, appliances, automotive parts and food packaging products for local consumption and exports was booming in Mexico, according to IHS. As a result, significant capacity for the production of polystyrene (PS), acrylonitrile-butadiene-styrene (ABS), expandable polystyrene (EPS) and styrenic elastomers was installed in the country. The resulting total demand for styrene, the main raw material required by these new plants, greatly exceeded the local supply, forcing the project owners to import the balance.

“Regarding trade,” Quijada said, “the Mexican petrochemical industry is increasingly in a trade deficit because domestic demand is growing, but insufficient local production capacity is being added to meet demand. While changes are already under way, we should see significant progress for petrochemical expansion after 2018, when the impacts of Mexico’s energy reform truly begin to help the country’s petrochemical business grow,” Quijada said.

Quijada will join other chemical, energy and economic experts from IHS, along with industry leaders to discuss a host of topics, including the implications of energy reform on the Mexican petrochemical industry, along with other market dynamics such as the crude oil price volatility and its impacts on the industry and region, at the Latin American Petrochemical and Polymers Conference (LAPPC), scheduled for November 7, in Cancun, prior to annual APLA meeting.