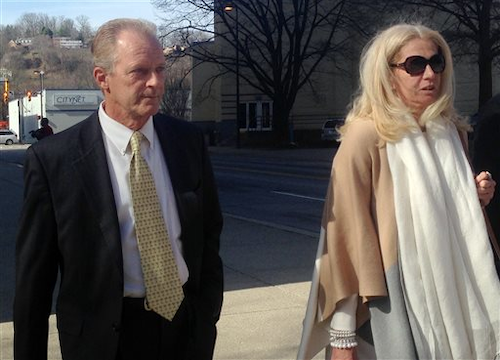 At separate hearings, William Tis, 60, and Charles Herzing, 64, entered the pleas to causing an unlawful discharge of a coal-cleaning agent into the Elk River.

But after entering his plea, Tis expressed doubt when U.S. District Judge Thomas Johnston asked him whether he committed the crime.

"I have signed my name to these documents," Tis said. "No, I don't believe I have committed a crime, but I am pleading guilty."

When pressed by the judge to explain, Tis said, "I do believe I am guilty of this offense. There are people we had hired ... Their failure results in my failure."

"I apologize for the confusion, your honor," Tis said.

Johnston said he accepted the plea but planned to review the facts.

"This exchange is rather unique in my experience," the judge said.

Herzing, who had attended Tis' hearing earlier, was straight to the point when Johnston asked whether he committed the crime.

The defendants and their attorneys declined to comment after the hearings.

Plea hearings are scheduled Wednesday for Freedom environmental consultant Robert Reynolds and tank farm plant manager Michael Burdette, and on March 23 for the company itself. All are charged with federal Clean Water Act violations and are expected to plead guilty.

Freedom filed for the protection eight days after the Jan. 9, 2014, leak. West Virginia American Water uses the Elk River for its water supply less than 2 miles downstream, and the spill prompted a tap water ban for several days in nine counties until the system was flushed out.

In addition to their ownership in the company, Tis was Freedom's secretary and Herzing was a vice president, both until 2013.

Southern, Tis, Herzing and Farrell were originally accused of failing to ensure that the company operated the Charleston facility in a reasonable and environmentally sound manner, and ignoring or failing to pay for repairs and maintenance needed to comply with environmental regulations.

Southern is accused of scheming to defraud Freedom's creditors and plaintiffs who sued the company and him after the spill from a storage facility tank. The alleged scheme included attempting to protect some of his assets from possible verdicts and judgments.

One count, fraud by interstate commerce carrier, alleges that Southern sent a $6.5 million check from a personal bank account around Feb. 7, 2014, to an insurance company to be deposited in an annuity.

An FBI affidavit says Freedom knew about critical flaws at its Charleston plant but never dealt with them.