Greenpeace says leaking, rusted barrels full of toxic materials stored in the open at a defunct chemical company in Hungary could cause an environmental catastrophe. 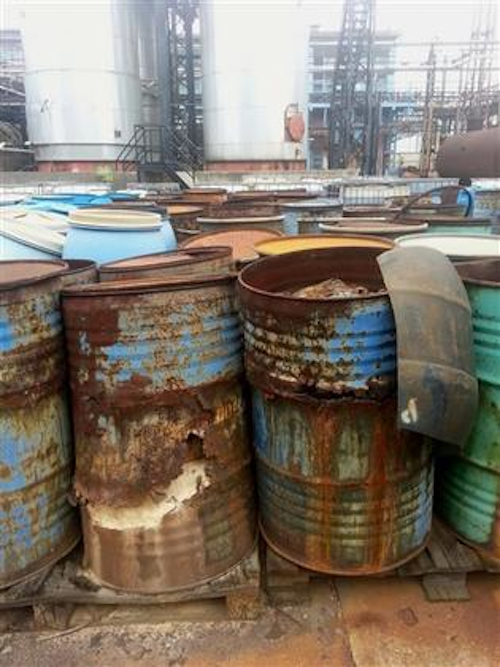 in Hungary could cause an environmental catastrophe. The government says it will take months before the chemicals are removed and the area can be cleaned up.

Gergely Simon, a Greenpeace chemicals expert, called the situation at the Budapest Chemical Works "near catastrophic." He said toxic materials like benzene were seeping into the ground water up to 60 meters (200 feet) deep at concentrations up to 100,000 times the allowed limits.

"We are turning to the government for funds to be able to remove and dispose properly of the barrels," Nemeth told the Associated Press. "Then comes the second phase, the cleanup of the area."

Since the company is controlled by a liquidator, Nemeth said changes to bankruptcy laws, a survey of the materials in the barrels and a public procurement process are needed before the state can take over the cleanup.

"Months are needed until we can begin this job in earnest," Nemeth said.

After the barrels are removed, cleansing the contaminated soil and water will take years and cost up to 10 billion forints ($36 million), Nemeth said.

Simon said the condition of the barrels had deteriorated greatly in the last few years and many had missing or incomplete identification labels. He said any chemical fires caused by lightning or summer heat could spread to other hazardous materials being used by other companies at the same site.

Istvan Kurthy, who lives in a nearby housing project, has lobbied authorities to deal with the problem.

"Until now, there has been little said about this issue," Kurthy said, adding that an "unpleasant chemical smell" drove him into action.