Since 2005, these lawsuits have generated a $14 million surplus for Edwardsville and solidified Madison County's place at the center of a long-running national debate over personal-injury claims. 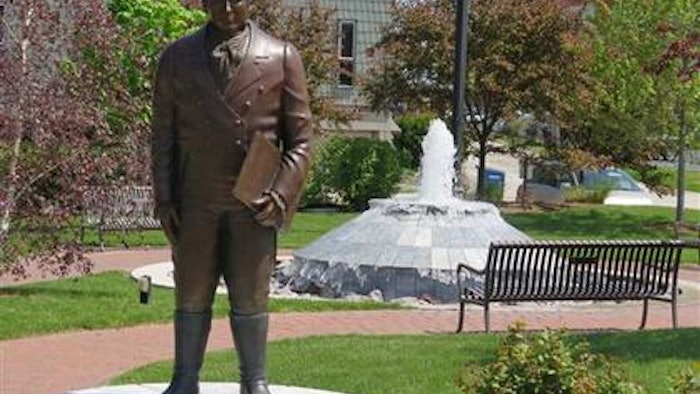 EDWARDSVILLE, Ill. (AP) — Few of the tourists who drive old Route 66 through this rural Illinois town are aware of its true economic

engine: a booming business in asbestos lawsuits that attracts law firms from across the country.

Since 2005, those lawsuits have generated a $14 million surplus for Edwardsville and solidified Madison County's place at the center of a long-running national debate over personal-injury claims.

Lawsuits have also proliferated in smaller industrial communities such as Beaumont, Texas, and Charleston, West Virginia, but Edwardsville is the smallest and perhaps most unlikely of the bunch, with just 24,000 residents. The city 30 miles north of St. Louis, Missouri, is better known for its historic downtown and the scenic drive along the nearby Mississippi River.

From 2012 through 2014, an average of 1,500 lawsuits claiming injury or death from asbestos were filed in Madison County — a nearly threefold increase from just five years earlier. By comparison, a Philadelphia court that specializes in personal-injury complaints involving birth-control devices, denture creams and other consumer products averaged a little more than 300 asbestos lawsuits over the same time period — in a city nearly 65 times larger than Edwardsville.

Madison County has the highest rate of lawsuits filed in Illinois, 8.2 per thousand residents in 2013, according to a report issued this month by the Illinois Civil Justice League. That's twice as many as filed in Cook County, home to Chicago.

The group Illinois Lawsuit Abuse Watch rallied Wednesday at the state Capitol to highlight concerns about the legal system, including the asbestos courts. They will find a sympathetic ear in Republican Gov. Bruce Rauner, who is pushing legislation to make it more difficult for plaintiffs to "venue shop," saying people should only file lawsuits in the county where a company has an office.

Currently, asbestos plaintiffs don't have to live in the jurisdiction where the suit is filed — or even in the state. They just have to show that the corporation being sued did business in heavily industrial communities that surround Edwardsville and line the Mississippi.

Plaintiff's lawyers from across the country were drawn to Edwardsville by its reputation as a favorable venue for clients sickened by the cancer-causing mineral after a succession of multimillion-dollar jury verdicts in the last couple of decades. Critics also point to the historically cozy relationship between elected judges and law firms that helped fund their campaigns, as well as lingering sympathies from the city's roots as a union hotbed early in the 20th century.

"The law firms in this area are huge economic engines," restaurant owner Sam Guarino said. "And they're very engaged in the community."

The local government benefits economically, at a time when many small towns are seeing budget crunches. County records show that filing fees contributed to a seven-figure surplus over the past decade, County Administrator Joseph Parente said, allowing elected leaders to avoid large property tax increases while helping to cover the operating costs of its legal system — from prosecutors and public defenders to jailers and judges.

The industry's influence extends well beyond the county courthouse. The baseball stadium at Southern Illinois University's Edwardsville campus is named for plaintiff's lawyer John Simmons, a former school trustee. His charitable foundation is a generous donor to cancer research centers in the state.

The overwhelming majority of lawsuits filed never go to trial. Instead, lawyers jockey for trial dates scheduled a year or two in advance and then negotiate. In early March, more than 200 asbestos suits were scheduled for trial in a single week.

Business groups that want to cap lawsuit awards continue to target Madison County courts. The Institute for Legal Reform, an affiliate of the U.S. Chamber of Commerce, owns weekly legal newspapers in Edwardsville and five other locales with courts that it considers to have run amok, including Beaumont, the Texas port city flush with chemical plants and refineries and a pioneering hotbed of asbestos-related class-action litigation, and Charleston, the West Virginia city sometimes referred to as "Chemical Valley" for the preponderance of heavy industry.

Edwardsville's asbestos courts have drawn more outside attention since the January arrest of former New York Assembly Speaker Sheldon Silver, who is accused of accepting more than $3 million from a law firm that specializes in asbestos suits while funneling $500,000 in state grants to a doctor who referred patients to that firm. Silver has pleaded not guilty.

Paul Napoli, a prominent New York lawyer whose firm represented thousands of rescue workers injured in the response to Sept. 11, opened a Madison County office focusing on asbestos litigation in 2012. He believes specialized asbestos courts are necessary to properly manage complex legal claims that can take years to resolve and may involve victims who are already dead from decades-old exposure.

"The defendants and the plaintiffs wanted an organized system," he said. "It benefits both sides."