A U.S. Chemical Safety Board report blamed the blast on the chemical reaction inside a 4,500-gallon tank that broke down waste from making methomyl, which is used in the pesticide Larvin. 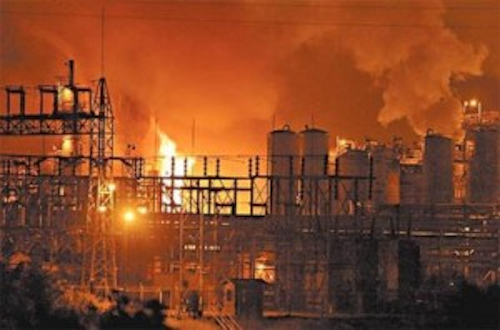 CHARLESTON, W.Va. (AP) — The government has struck a $5.6 million settlement with Bayer CropScience over an explosion that killed two people at the company's Institute, West Virginia pesticide plant in 2008, federal officials announced Monday.

Under the agreement with the U.S. Environmental Protection Agency and the Department of Justice, Bayer CropScience will commit to spending $452,000 on safety improvements at chemical storage facilities in West Virginia, Texas, Missouri and Michigan.

The company will spend another $4.23 million to improve emergency preparedness and response in Institute and protect the Kanawha River. Bayer CropScience also will pay a $975,000 civil penalty.

"The tragic accident at the Bayer CropScience facility in West Virginia underscores the need for hazardous chemicals to be stored and handled in accordance with the law to protect worker health and the environment," Cynthia Giles, EPA's Office of Enforcement and Compliance Assurance assistant administrator, said in a news release. "This settlement will establish important safeguards at its facilities across the country and improve emergency response capabilities in the Institute, West Virginia community."

A U.S. Chemical Safety Board report blamed the blast on the chemical reaction inside a 4,500-gallon tank that broke down waste from making methomyl, which is used in the pesticide Larvin. The report says company management withheld information from county emergency officials during the response.

The process uses the highly toxic chemical methyl isocyanate, or MIC, but the blast did not damage a tank containing the chemical. The same chemical was responsible for the deaths of thousands in Bhopal, India, when it leaked from a former Union Carbide plant in 1984.

One worker died in the 2008 West Virginia explosion, which was as strong as 17 sticks of dynamite and caused damage seven miles away. A second worker died weeks later from burns.

Bayer CropScience, which employs 150 people at the Institute facility, says methomyl is no longer produced at the sprawling plant about 12 miles west of Charleston. But it is purchased and shipped there.

The company said that it hasn't produced, used or stored methyl isocyanate at the plant for more than four years. Bayer CropScience has brought on many additional safeguards at the plant since the 2008 explosion, company officials added.

The company says the projects it will fund include: more training and equipment for area fire departments; shelter-in-place training at local schools; mobile emergency communications within the county; better local police communications equipment; expanded wastewater storage to reduce the possibility of spills of toxic material from the site; and a survey of high school chemistry labs to remove hazardous chemicals.

A consent decree filed in U.S. District Court in Southern West Virginia is subject to a 30-day public comment period and court approval.

The company previously paid a $143,000 fine to the U.S. Occupational Safety and Administration for citations stemming from the fatal explosion.