Two people remained hospitalized Thursday after an explosion that heavily damaged an aerospace manufacturing plant in the town of Newport. 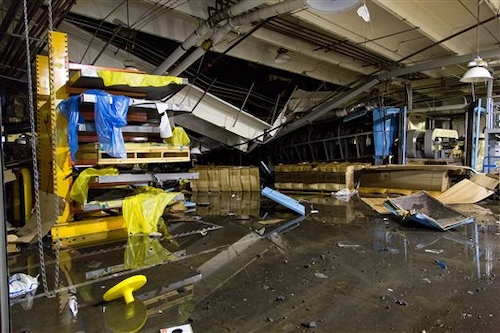 SPOKANE, Wash. (AP) — Two people remained hospitalized Thursday after an explosion that heavily damaged an aerospace manufacturing plant in the town of Newport.

Three other people were treated and released from a hospital in Newport after the Tuesday night explosion at the Zodiac Aerospace SA plant.

The state Department of Labor and Industries is investigating to learn the cause of the explosion and whether any of its safety rules were violated.

The Pend Oreille County Sheriff's Office said the explosion damaged the plant so heavily that the building is deemed unsafe to enter.

About 100 people worked at the plant, making various components for the interiors of jetliners.

The company declined to comment on the explosion to The Associated Press on Thursday.

Plant General Manager Mike Pound told The Spokesman-Review on Wednesday that it was unknown how long the factory, one of the largest employers in the distressed county, would be closed.

Newport is a town of 2,100 residents located on the Washington-Idaho border about 50 miles north of Spokane.

Among the injured, Cristina Giannone, 33, of Newport, was in critical condition in a Spokane hospital, the sheriff's office said. Linda Bergerson, 68, of Old Town, Idaho, was in stable condition.

First responders learned that a so-called Pre-Preg Treater machine was believed to have caused the explosion, the sheriff's office said.

"The machine is used in the plant to make material for aircraft interiors," the sheriff's office said in a press release.

Shortly after the explosion, a chemical odor was detected in the area, prompting the temporary evacuation of several homes and businesses, the sheriff's office said.

The powerful explosion shortly before 9 p.m. Tuesday toppled large pieces of machinery, lifted an entire floor off its foundation and caused portions of the roof to collapse, officials said.

Zodiac Aerospace is a key supplier to Boeing Co., which has a huge presence in the state. The Newport plant makes various components for the interiors for Boeing and Airbus jetliners.