The chemical hearth was likely part of the classroom of John Emmet, the university's first natural history professor, who collaborated with Thomas Jefferson on equipping the new college's facilities in the 1820s. 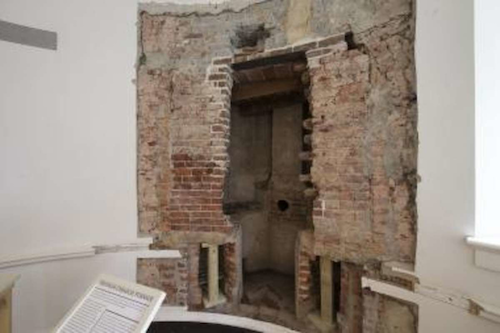 Workers renovating the historic Rotunda on the University of Virginia campus uncovered a long-hidden science lab that dates to the college's illustrious founder.

The chemical hearth was likely part of the classroom of John Emmet, the university's first natural history professor, who collaborated with Thomas Jefferson on equipping the new college's facilities in the 1820s.

“This may be the oldest intact example of early chemical education in this country,” said senior historic preservation planner Brian Hogg.

The hearth was built on the lower floor of the Rotunda — the iconic Jefferson-designed heart of UVA's campus — to enable scientific experiments and demonstrations. Two fireboxes provided heat to the laboratory, while underground tunnels circulated fresh air and flues carried away fumes and smoke.

The area was potentially walled off in the mid-1840s after the chemistry facilities were moved to a different wing of the building, a decision that likely spared the hearth from the 1895 fire that gutted much of the Rotunda’s interior.

The hearth's fireboxes were discovered in the 1970s, but the rest of the lab remained hidden until workers began preparing for the latest round of renovations.

Experts speculated that the hearth may have been for Emmet's personal use since students could have conducted their experiments on portable hearths.

The facility will become part of a permanent display when renovations are completed in 2016.

“The original arch above the opening will have to be reconstructed, but we hope to present the remainder of the hearth as essentially unrestored, preserving its evidence of use," Hogg said.