This latest fire could turn the spotlight to what some say is Dhaka’s emerging plastics industry. Bangladesh is home to about 3,000 plastics manufacturing units and some have predicted the industry could grow more. But if huge safety concerns are revealed, it’s likely to be bumpy growth that’s fraught with labor unrest and investor concerns. 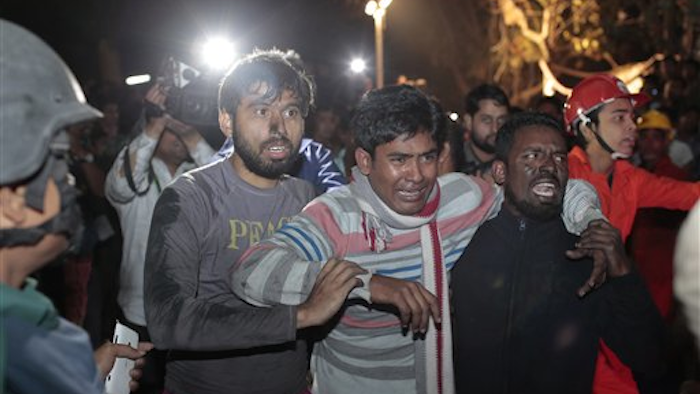 At least 13 people were killed Saturday in a fire inside a plastics factory in Dhaka, the capital of Bangladesh. Local media reported that the dead included 10 men and three women.

Fire officials said that the fire inside the four-story building with a tin roof was set off by an electric short circuit on the ground floor, which quickly spread through the building after a boiler on the same floor exploded. CNN reported that flammable chemicals also caused the flames to spread fast.

“The entire area was filled with smoke and the stench of burning chemical,” a witness was quoted as saying.

Local officials said that bodies removed from the scene were so badly burnt that they could not be immediately identified. They estimated that 40 people were working inside the building when the fire broke out.

This is just the latest in a string of factory disasters that have plagued Dhaka in the last few years. The only bright spot for the tragedies is how they’ve led to reform in a country that’s home to thousands of manufacturing facilities.

In 2012, the Tazreen Fashion factory in Dhaka was hit by a fire that killed at least 117 people and injurrf more than 200 — making it the deadliest factory fire in Bangladesh’s history. That incident, which officials reported was caused by a short circuit on the ground floor of the nine-story factory, led to a revamp of fire regulations. Local workers safety groups said the new standards would call for increased training of factory inspectors and more emergency exits. Wal-Mart and Gap also signed a pact following the fire saying they would be held accountable for factory inspections.

Then in 2013, Rana Plaza, an eight-story garment factory, collapsed, killing 1,129. The incident set off waves of protests throughout Bangladesh and led to charges being filed against Rana Plaza’s owner. In the aftermath, 17 major retailers, including Wal-Mart, Gap, Target and Macy’s, announced plans to continue improving factory safety in Bangladesh — but many labor groups said the proposals didn’t go far enough.

While those larger incidents brought attention the dangerous working conditions inside Bangladesh’s garment factories, this latest fire could turn the spotlight to what some say is Dhaka’s emerging plastics industry. According to a 2011 Journal of Chemical Engineering report, Bangladesh has about 3,000 plastic manufacturing “units” (compared to about 5,000 garment factories). The report identified the availability of cheap labor and the fast-developing plastics waste recycling industry due — at the time — to the rising costs of petroleum as potential catalysts for the plastics industry in Bangladesh growing on the global market.

But if huge safety concerns are revealed, it’s likely to be bumpy growth that’s fraught with labor unrest and investor concerns.

According to a VICE News report, Bagladesh’s government has now formed a committee to investigate this latest plastics factory fire.