Federal regulators on Friday ordered a pipeline company to make major upgrades to a line that spilled almost 40,000 gallons of oil into Montana's Yellowstone River and fouled a local water supply. The order comes after Bridger Pipeline of Casper, Wyoming, announced plans to bury its line deeper beneath the Yellowstone to protect against future accidents. 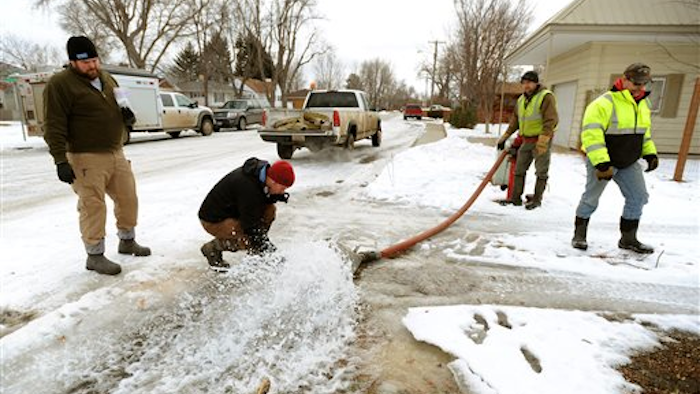 BILLINGS, Mont. — Federal regulators on Friday ordered a pipeline company to make major upgrades to a line that spilled almost 40,000 gallons of oil into Montana's Yellowstone River and fouled a local water supply.

The order comes after Bridger Pipeline of Casper, Wyoming, announced plans to bury its line deeper beneath the Yellowstone to protect against future accidents.

The Department of Transportation order would make that improvement mandatory and require identical action where the line runs beneath the Poplar River in northeast Montana.

The cause of the Jan. 17 spill remains under investigation. It prompted a five-day shutdown of drinking water services for 6,000 people in the city of Glendive after oil got into a treatment plant.

Cleanup crews so far have made minimal progress recovering oil from the ice-covered river. The Yellowstone is a popular recreation destination and home to fish including the endangered pallid sturgeon.

Warmer weather Friday added a new complication, softening the ice and making it even more dangerous to be on. That forced workers to dismantle equipment set up 60 miles downstream from the spill, where they had hoped to catch oil passing through a huge gash carved into the ice, said Jeni Garcin with the Montana Department of Environmental Quality.

"We're not able to get anything substantial, but we're mopping it up where we find it," she said.

The Poplar Pipeline will stay shut down from Glendive to near the Canada border until the damaged section is replaced and the requirements of the federal order are met, said Bill Salvin, spokesman for Bridger Pipeline.

"We're not in a race to get back to business," Salvin said. The most important thing is getting the water (for Glendive) back online, then cleaning up (the river) as much as possible."

The 193-mile pipeline delivers crude from the Bakken oil patch of North Dakota and Montana to a terminal in Baker, Montana, about 55 miles south of Glendive. It was built in the 1950s and has a capacity of 42,000 barrels of oil a day.

The southern section of the line remains operational.

When the pipeline was first installed, workers dredged the Yellowstone and laid the pipe across the bottom.

A 2011 survey determined the line was buried at least 8 feet beneath the riverbed, according to the Transportation Department. Bridger Pipeline had earlier said the survey was done in 2012, but Salvin said that was an error.

Prior accidents, including a 2011 Exxon Mobil pipeline spill on the Yellowstone near Billings, have demonstrated that pipelines beneath bodies of water can quickly become exposed by floodwaters or other natural forces.

The 2011 spill left oil along an 85-mile stretch of the Yellowstone River. The Transportation Department on Friday announced a final $1 million penalty against Exxon Mobil Corp. for safety violations stemming from the accident. Safety regulators said in part that Exxon Mobil had failed to adequately heed warnings that the pipeline was at risk.

Federal rules that require lines to be buried at least 4 feet beneath riverbeds were reviewed after the Yellowstone spill. Government officials determined in 2013 that 4 feet was sufficient.

One factor investigators will consider in the latest spill is whether a massive ice jam in early 2014 could have damaged the line. Local residents say the jam blocked the Yellowstone near the site of the pipeline breach.

To install the new sections of pipeline required under Friday's order, Bridger Pipeline must use an expensive technique known as directional drilling. That's a process in which lines are drilled sometimes dozens of feet beneath a river, passing through solid rock or other material considered more stable than the constantly shifting riverbed.

Salvin said it's uncertain when the work could be completed.

Bridger Pipeline is a subsidiary of True Cos. A sister company operating in Wyoming, Belle Fourche Pipeline, had three oil spills within a month in 2014 totaling more than 100,000 gallons.

Those spills included a malfunction that caused an oil storage tank to overflow and spill 70,000 gallons, a 25,000-gallon spill from a corroded section of pipeline, and a 9,000 gallon spill when heavy equipment damaged a pipeline.