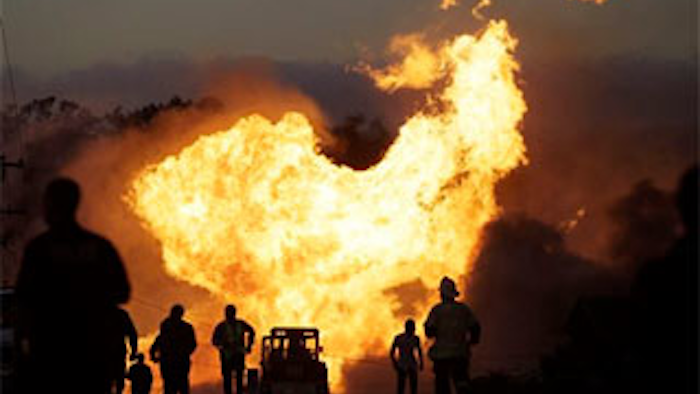 The penalty would be the largest ever imposed on a utility company by a state regulator, officials said.

The California Public Utilities Commission's investigators said the fine was an appropriate remedy for dozens of safety violations extending back several decades, and said the company's shareholders should shoulder the cost, not the utility's customers.

"This is going to send a very strong deterrent message to PG&E that this kind of conduct and culture will not be tolerated," said Brig. Gen. Jack Hagan, director of the commission's Safety and Enforcement Division. "They have just plain failed to follow safety standards in so many areas."

The National Transportation Safety Board unanimously agreed in 2011 that the accident was caused by what board chairman Deborah Hersman called a "litany of failures" by PG&E, as well as weak oversight by regulators.

Separate from the NTSB investigation, investigators at the utilities commission blamed PG&E for the explosion, which occurred when an underground pipeline ruptured at the site of a decades-old faulty weld, sparking a massive fire.

Commission investigators and consumer advocates filed a range of proposals for fines Monday.

The City of San Bruno, which is still struggling to rebuild the neighborhood devastated in the blast, said earlier Monday that the utility's shareholders should pay no less than $1.25 billion in fines, plus at least $1 billion toward pipeline inspection and upgrade costs.

PG&E will file its proposal later this month, and a judge from the utilities commission is expected to make a final decision about how much to fine the company later this year.

PG&E has accepted liability for the disaster in numerous public statements but has denied most of state investigators' allegations that the utility violated safety rules.

"The penalties proposed by the commission staff and others far exceed anything that I have seen," PG&E Corp. CEO Tony Earley said in a statement. He added that the penalty "could dramatically set back our efforts to do the right thing by making it harder and more costly to finance the remaining improvements that are needed in our gas system."

Consumer advocates said the fine the commission proposed was appropriate, given the company's myriad violations before the explosion and an outside consultant's finding that PG&E could raise $2.25 billion in equity to cover fines without damaging its financial condition.

The proposal calls for the $2.25 billion to be directly invested in safety testing, replacing and upgrading hundreds of miles of PG&E's gas transmission lines, rather than being sent to the state's general fund. That means the company would be able to claim the penalty as a tax deduction, Hagan confirmed.

"It's absolutely the amount PG&E should pay for their all their past violations," said Marcel Hawiger, an attorney with the nonprofit Utility Reform Network. "This is a very big penalty, but it's not quite as big as it seems when you account for the tax benefits PG&E would accrue."