France's Total has agreed to explore for shale gas in Britain, making it the first major oil company to enter the country's market in the face of widely publicized environmental protests. 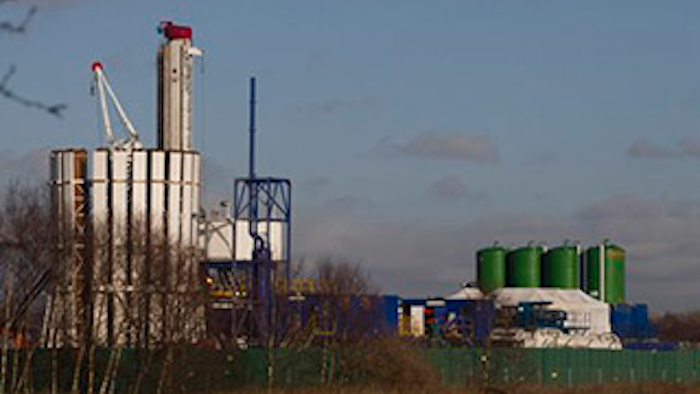 LONDON (AP) — France's Total has agreed to explore for shale gas in Britain, making it the first major oil company to enter the country's market in the face of widely publicized environmental protests.

Environmental activists oppose the extraction of fuel from shale, known as hydraulic fracturing, or fracking, saying it contaminates ground water. The process injects hundreds of thousands of gallons of water laced with chemicals into the ground to shatter the rock and free the gas.

"A key part of our long-term economic plan to secure Britain's future is to back businesses with better infrastructure. That's why we're going all out for shale," Prime Minister David Cameron said in a statement.

The government stepped in to ensure that companies exploring for shale gas get necessary planning permission by offering host communities the chance to keep all of the business taxes generated by such projects, instead of the normal 50 percent. Local councils historically reluctant to accept such projects may be swayed by such incentives, particularly at a time when government austerity programs meant to reduce the deficit after the financial crisis have put the squeeze on local authorities.

"This is a naked attempt by the government to bribe hard-pressed councils into accepting fracking in their area," said Greenpeace climate campaigner Lawrence Carter. "(Business Minister Michael) Fallon is effectively telling councils to ignore the risks and threat of large-scale industrialization in exchange for cold, hard cash. But the proposal reveals just how worried the government is about planning applications being turned down."

Under the terms of the deal with IGas Energy Plc and its partners Egdon Resources, Dart Energy and eCorp, Total pledged to cover $1.6 million in back costs and spend as much as $46.5 million to develop the licenses.

In financial terms, that is much smaller than similar projects in the U.S., where shale fuel has helped create a surge in energy production. But the participation of a major company like Total suggests fracking may become a reality in Britain.

Poland and Britain are the only countries in Europe actively exploring for shale gas. Other countries have been hesitant, fearing the environmental repercussions.

Environmental activists like Martin Burke promise that Total will find itself targeted by protesters, such as demonstrators who have marched at Barton Moss near Manchester, northwest England, and set up a camp to oppose exploratory drilling at the site.

"It seems to me that some people want to do what they did in the United States and turn a quick buck," Burke said.

Barton Moss, has earned much attention in the U.K. and it is also owned by IGas. The company said it hasn't used fracking at Barton Moss, though campaigners fear it might, depending on what the exploration wells show.

Some 50 activists — and roughly the same number of police — gathered at the site Monday. Some protesters climbed on to vehicles to disrupt traffic in and out of the facility but the demonstration was generally peaceful and broke up soon after.