The debate over exporting liquefied natural gas is intensifying as the Energy Department considers an array of applications to ship the fuel to Japan, India and other countries where prices are far higher than in the United States. 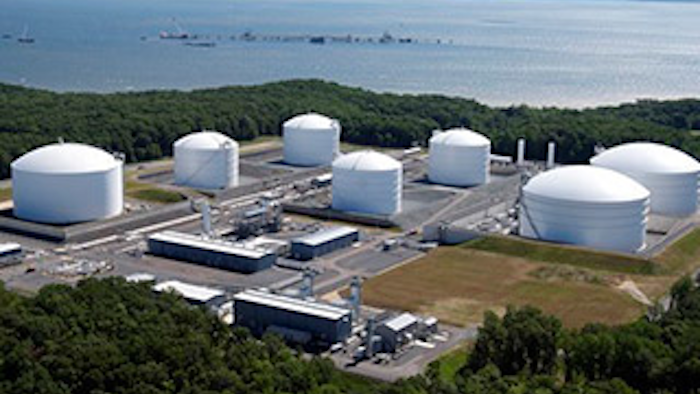 WASHINGTON (AP) — The debate over exporting liquefied natural gas is intensifying as the Energy Department considers an array of applications to ship the fuel to Japan, India and other countries where prices are far higher than in the United States.

Industry groups, meanwhile, say the administration is moving too slowly, with just one of nearly two dozen proposed LNG export terminals given final approval in the past two years. Four other projects have received conditional backing.

"The Department of Energy's slow-walk of LNG export licenses violates our trade obligations" and could cause the U.S. to lose billions of dollars in the global gas market, said Margo Thorning, director of the Act on LNG campaign, an advocacy group that supports gas exports.

"In a perfect world, we'd like to just see them approve all the applications that meet the requirements and let the market figure out which ones are actually going to be built," said Marty Durbin, president and CEO of America's Natural Gas Alliance, an industry group that has pushed for more exports to keep the U.S. competitive in a global market.

If built, the projects already given tentative or final approval would export about 6.7 billion cubic feet of natural gas a day, enough to meet the needs of nearly 70,000 homes for one year. And that is just the beginning. The proposals considered so far represent less than one-quarter of the total amount energy companies are seeking to export.

Energy companies say the U.S. should act now, before other countries such as Russia or Iran approve export projects that could help meet growing energy demands in Asia and other parts of the world.

The push for LNG exports comes amid a boom largely resulting from a drilling technique known as hydraulic fracturing, or fracking, which involves pumping huge volumes of water, sand and chemicals underground to split open rocks to allow oil and gas to flow. Improved technology has allowed energy companies to gain access to huge stores of natural gas underneath states from Wyoming to Pennsylvania but has raised widespread concerns that it might lead to groundwater contamination and even earthquakes.

American oil companies are pushing to export crude oil for the first time since the Arab oil embargo in the early 1970s. Energy Secretary Ernest Moniz suggested at an industry gathering last month that the drilling boom may mean it is time to revisit the ban on crude exports.

President Barack Obama has said he generally supports natural gas exports and predicts the U.S. could become a net gas exporter by 2020. Moniz, who took over as energy secretary last year, has pledged to move "expeditiously" on pending applications to export natural gas.

The Energy Department "understands the significance of this issue — as well as the importance of getting it right," said Paula Gant, deputy assistant energy secretary for oil and natural gas.

The high stakes are illustrated by the conflicting views of U.S. manufacturers.

Most business groups back LNG exports as a way to reduce the nation's trade deficit and support thousands of jobs. But some manufacturers that use natural gas as a raw material or fuel source oppose exports, saying they could drive up domestic prices and increase manufacturing costs.

Major companies, including Dow Chemical Co., aluminum producer Alcoa Inc. and steelmaker Nucor Corp., are working together as members of America's Energy Advantage to oppose the exports. The group argues that the Energy Department has no legal standards for approving exports and is using a flawed study to support its finding that such projects are in the public interest.

On the other side, the National Association of Manufacturers said the Obama administration is in danger of violating treaty obligations under the World Trade Organization by restricting exports of coal and natural gasto energy-hungry countries in Asia and Europe.

"Unfortunately, it has become increasingly difficult to get a permit to do just about anything in the United States, and infrastructure projects like LNG and coal export terminals are crippled by delays and regulatory obstacles," said Jay Timmons, the manufacturers association's president and CEO.

Mike Tidwell, director of the Chesapeake Climate Action Network, an environmental group that opposes a proposed LNG export terminal on Maryland's Chesapeake Bay, said the natural gas industry wants quick approvals of massive export projects so it can make more money before other countries such as Russia and India start producing their own liquefied natural gas.

In September, the Energy Department gave tentative approval to a $3.8 billion export project proposed by Virginia-based Dominion Resources. The Cove Point, Md., plant would be the largest LNG terminal on the East Coast, shipping millions of cubic feet of natural gas to Japan and India every day on 1,000-foot-long-tankers rumbling through the Chesapeake Bay.

"Let's slow down, so we can have a conversation about how this makes sense, not just economically but environmentally," Tidwell said.

Kevin Book, an energy analyst, said the Energy Department is seeking a political and economic "sweet spot," with enough export projects approved to keep the drilling boom going, but not so many as to risk an oversupply of natural gas. Book expects no more than six or eight LNG terminals to be built.

"The resource is vast, but terminals are very expensive to build and there are limits in how many will be built or are needed," he said.