Canadian Crude As Explosive As Gas

The crude oil that exploded during a fatal derailment in Quebec last year that killed 47 people had characteristics similar to that of unleaded gasoline, a highly flammable liquid, Canada's transportation safety agency said Thursday. 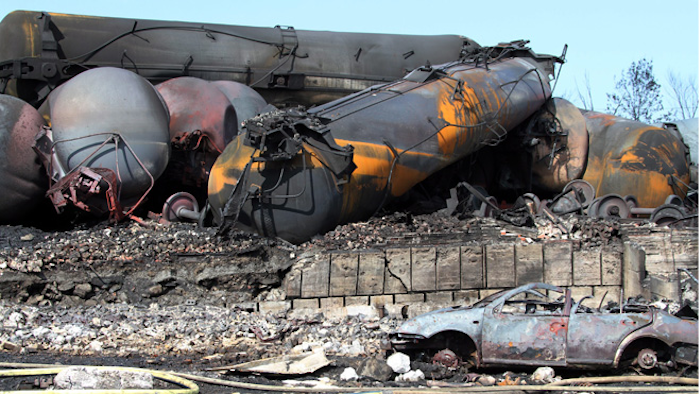 TORONTO (AP) — The crude oil that exploded during a fatal derailment in Quebec last year that killed 47 people had characteristics similar to that of unleaded gasoline, a highly flammable liquid, Canada's transportation safety agency said Thursday.

The Transportation Safety Board said in a newly released report that the crude tested by Canada's transportation agency had a low flash point, which refers to the temperature at which the crude gives off enough vapor to ignite in air.

Last July, a runaway train with 72 tankers of oil derailed and exploded in the small Quebec town of Lac-Megantic near the Maine border, destroying the town's center.

The transportation board said Thursday that the lower flashpoint of the oil on the train explains in part why it ignited so quickly once the tank cars were breached.

"The large quantities of spilled crude oil, the rapid rate of release and the oil's high volatility and low viscosity were likely the major contributors to the large post-derailment fireball and pool fire," said the agency.

The agency noted that there was no indication that the crude oil's properties had been affected by contamination from fracturing, or fracking, a process used to capture gas or oil from underground shale by applying pressure by pumping fluids into the wellbore to open up pathways through which the oil can flow into.

The report said that the oil involved in the accident should have been classified as a more dangerous flammable liquid than the train's placards indicated. The report said the oil from the cars was a Class 3, PG II product, although it had been documented as a less volatile, Class 3 PG III.

The agency took oil samples from nine tank cars that were intact after the crash and subjected them to a rigorous analysis.

The samples were consistent a light, sweet crude oil, with volatility comparable to that of a condensate or gasoline product.

Concerns about transporting oil by train were heightened after the fiery train crash, along with a string of other explosive accidents across North America, which prompted the U.S. Department of Transportation to issue an alert about the potential high volatility of crude from the Bakken oil patch.

The U.S. agency said that light crude oil from the Bakken oil region, which straddles North Dakota, Saskatchewan and Manitoba, may be different from traditional heavy crudes because it is prone to ignite at a lower temperature. The sprawling oil shale reserve is fueling the surging industry in eastern Montana and western North Dakota, which is now the second-largest U.S. oil producer behind Texas.

Experts have said that lighter crudes, which contain more natural gas, have a much lower flash point.