WV Still Wary Of Water A Month After Spill

For weeks, government officials have said the running water in nine WV counties is suitable for all daily needs. But many of the 300,000 residents whose water was contaminated Jan. 9 are not convinced. 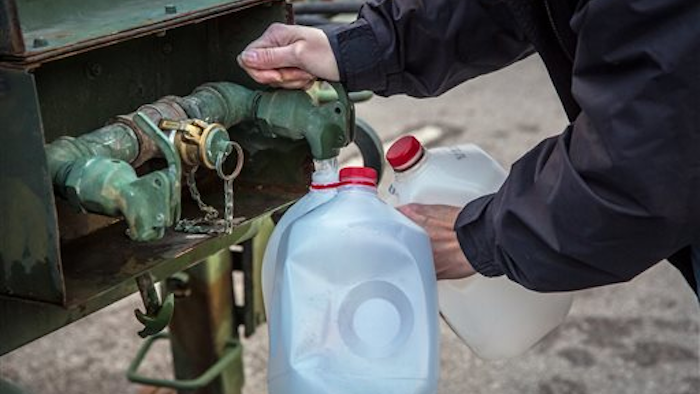 CHARLESTON, W.Va. (AP) — More than a month after chemicals seeped into West Virginia's biggest water supply, Jeanette Maddox would rather bundle up, drive to a shopping center parking lot and fill jugs of water from the spigot of a tanker truck than trust the tap in her kitchen.

This is Maddox's new routine three times a week, what she considers a necessary burden to feel safe drinking water, cooking with it and making coffee.

For weeks, government officials have said the running water in nine counties is suitable for all daily needs. But Maddox, like many of the 300,000 residents whose water was contaminated Jan. 9 is not convinced.

She notes that officials waited four to 10 days, depending on the neighborhood, before allowing people to use their water. In the days right after Freedom Industries leaked chemicals into the Elk River in Charleston, officials said the water should be used only for flushing toilets and fighting fires.

Residents have struggled to track, let alone trust, mixed messages and muddied information from government officials and Freedom Industries, the company involved. Despite public pressure, officials have been reluctant to call the water "safe" and have started arguing that the term is subjective. Instead, they use phrases such as "appropriate to use."

"Well, they won't use the word 'safe,'" said Maddox, who lives with her two daughters and two grandsons in Charleston. "But, the water is 'OK.' We don't know that."

Maddox is not alone, as visible signs of doubt about the water are everywhere.

In Charleston, eateries display signs that say, "We're cooking with bottled water." The chemical licorice smell still wafts out of some showers, toilets and taps in homes and businesses. The smell resurfaced in five schools Feb. 5 and 6, and the district temporarily shut them down. In one case, a teacher fainted and went to the hospital.

Hours after two of the schools closed Feb. 5, an official with the Centers for Disease Control and Prevention gave a broad endorsement of the water, saying everyone, pregnant women included, could use it.

Up to that point, pregnant women had received conflicting guidance. Days after thousands of people were cleared to start drinking from faucets, federal officials advised that pregnant women should consider a different source of water.

The nine-county region was cleared to use the water before Freedom Industries revealed that a second chemical, stripped PPH, was in the tank that spilled.

Crude MCHM, the first chemical discovered in the spill, and stripped PPH, are used to clean coal. Little is known about their toxicity, in the short or long term. Neither is considered hazardous by federal standards. Only a handful of studies exist for crude MCHM, and they were on lab animals.

Today, doctors are still advising some patients, such as people with chronic conditions or compromised immune systems, to avoid the water on a case-by-case basis, said Kanawha County Health Officer Dr. Rahul Gupta.

Outside water continues to be brought in by tanker trucks and military vehicles, under orders by Gov. Earl Ray Tomblin's administration. The public still demands it, Tomblin said.

"It is impossible to predict when this will change, if ever," Tomblin wrote in a Jan. 29 request for more federal help.

Last week, Tomblin changed his mind on in-home water testing, which he and other officials showed little interest in before. The inspections are part of a larger study Tomblin ordered that looks into key details that officials relied upon initially to lift the water-use ban.

Tomblin contracted Dr. Andrew Whelton to lead the study. The researcher, based at the University of South Alabama, came to Charleston to study the spill without outside funding. Then he landed a $50,000 federal grant studying what the chemicals do to pipes in houses. But he had been seeking online donations for return trips to West Virginia to monitor long-term water quality in homes.

Then Tomblin came calling and provided Whelton $650,000 from the state. With that money, Whelton will sample water in some homes and continue investigating how the chemical permeates or bonds to pipes. Officials have maintained that the chemical doesn't have the right properties to stick around in piping and resurface later.

Whelton also is studying the odor threshold and threat of the chemical. Government experts have long said people can smell the licorice tinge well after the chemical is no longer dangerous in water or vapor. The smell enveloped the valley for days.

Whelton's team also is tasking experts to investigate the CDC's standard for how much of the chemical can be safely ingested in drinking water.

Tomblin's wide-ranging project would need millions more dollars in federal grants. He's calling for that money and, in an effort to re-instill public confidence, for the research team to be able to maintain independence from government officials.

"It is time to let the political officials step aside and let the scientists come in and do the work we need them to do," Tomblin said.

In a region nicknamed "Chemical Valley" because of the industry's huge footprint in greater Charleston, even residents who have lived here their entire lives are concerned.

At a legislative public meeting two weeks ago, several people said they're considering moving. Before the spill, people were already leaving West Virginia at one of the highest rates in the country.

Sue Davis has lived in Kanawha County for 71 years. She vowed that her faith in the water would never return. She said trusting the authorities won't make the potential risks any less threatening.

"I think (people) are deceiving themselves," Davis said.

Each rash, itch, dry patch of skin or dizzy spell lends doubt for people who shower or brush their teeth in the water. Gupta, the health official, said long-term monitoring is needed to track health conditions that could develop much later because little is known about the chemical's long-term effects.

"People are as angry and as frustrated as they were in the first few days," Gupta said. "It's been a challenge. We are on frontiers unknown. And, the population — the 300,000 people or so — continue to suffer."