An energy company is dusting off an old, unused state law that can force property owners to accept oil and gas drilling under their land, pitting neighbor against neighbor in a Pennsylvania community and raising the possibility that lawmakers will have to take sides. 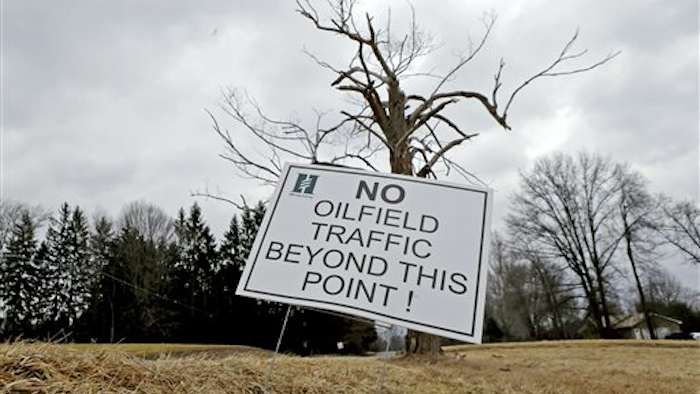 NEW BEDFORD, Pa. (AP) — An energy company is dusting off an old, unused state law that can force property owners to accept oil and gas drilling under their land, pitting neighbor against neighbor in a Pennsylvania community and raising the possibility that lawmakers will have to take sides.

Houston-based Hilcorp seeks to use a 1961 Pennsylvania law to drill under the property of four holdout landowners in New Bedford, near the Ohio border an hour north of Pittsburgh. The concept, known as "forced pooling," means that people who don't sign leases get bundled in with those who do, to make drilling more efficient and compensate all the landowners.

The stakes are high. Property owners can reap royalties totaling hundreds of thousands or even millions of dollars from drilling in the Utica Shale formation, which lies below the better-known Marcellus Shale.

Suzanne Matteo, one of the four who has refused to sign a lease, said she is furious that the company may be able to drill under her property without her permission.

On the other side are many neighbors who have signed leases, such as Bruce Clingan, who owns the roughly 200-acre Tanglewood Golf Course with his wife, Jody. They signed a lease with Hilcorp a few years ago and received a signing bonus of more than $500,000, plus 18 percent royalties on future production.

"I don't understand how people that own 4 acres of ground can hold up such a big thing. I don't agree with that," Clingan said.

Hilcorp said that 99 percent of the property owners in the 3,267-acre tract have signed leases, and that drilling would occur a mile or more under the surface of the holdout's property. Invoking the old law, the company said, would ensure that "all participants, leased or unleased, are compensated for the minerals they own."

With new technology, a well can be drilled down and then turned sideways, and the so-called extensions run for a mile or more away from the drill site. Some of those extensions are what Hilcorp wants to send under Matteo's property, but the company hasn't said exactly where wells would be located.

Matteo said she's resigned to drilling in the area, since her neighbors have signed leases. But she's concerned about possible pollution and effects on property values, so is refusing to sign "on principle."

The whole battle also has a political edge, since the state Department of Environmental Protection will make the final ruling on whether to approve the request. The response to Hilcorp's proposal has been so strong that two hearings that had been planned for last week have been postponed until early May.

Over 5,000 new wells have been drilled in Pennsylvania since 2008 using hydraulic fracturing, or fracking. The law does not apply to the Marcellus Shale formation, the source of most of the gas being produced, but does to the Utica Shale, which energy companies see as a new frontier, since it also holds oil.

Forced pooling laws exist in some form in about 40 states and are usually used with little dispute, said Jacqueline Weaver, an expert on oil and gas law at the University of Houston.

The idea was once contentious, Weaver said, but courts have previously settled the question of whether it is unconstitutional.

She noted that such laws were designed to reduce the number of unsightly drilling rigs on the surface, and to find a way to fairly compensate small landowners who lived on the edge of a "pool" of oil or gas. It's possible, for example, for drilling to pull oil or gas from under adjacent properties.

Weaver is puzzled why Hilcorp doesn't just drill around Matteo and other landowners, since modern drilling rigs can twist and turn the well bore to follow deposits of shale gas.

The Hilcorp case highlights the political sensitivity behind forced pooling, even in a state where Gov. Tom Corbett, a Republican, and most lawmakers favor the industry.

Corbett, who took office in 2011 as a strong ally of the industry, promptly declared his opposition to forced pooling, a position he holds today, an aide said.

Before Corbett took office, the industry had tried to persuade lawmakers to extend the pooling law to the rich Marcellus Shale when the drilling boom began. Republicans began drafting legislation to do just that before realizing that it could touch a nerve.

Senate President Pro Tempore Joe Scarnati, R-Jefferson, said at the time that people's personal property rights were like their guns, and "you're treading on some thin ice when you try to take either."

No bill was ever introduced. Meanwhile, a bill currently pending in the Legislature would repeal the forced pooling law.

Sen. Elder Vogel, R-Beaver, whose district encompasses the Hilcorp area, said he had not decided which side to take and expected lawmakers to have mixed opinions.

Vogel, a farmer who had three Marcellus Shale wells drilled on the 370 acres he owns, said he has friends on both sides.

"Does the good outweigh the bad?" Vogel questioned. "I don't know. That's what you have to wrestle with."