Three employees of the railway company involved in the runaway oil train disaster that killed 47 people last summer are due to appear in court Tuesday to face criminal negligence charges in the small Quebec town that was partially incinerated by exploding tanker cars. 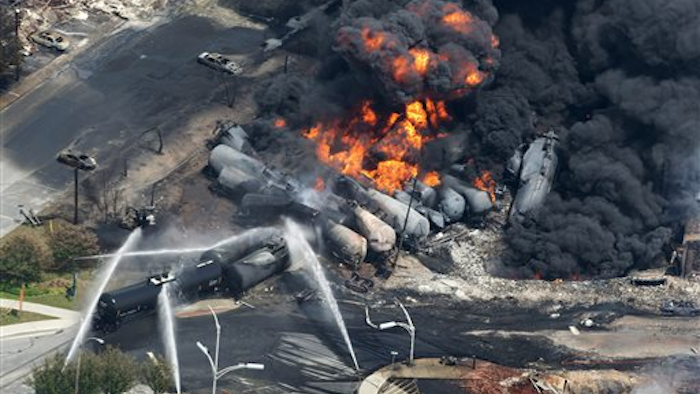 MONTREAL (AP) — Three employees of the railway company involved in the runaway oil train disaster that killed 47 people last summer are due to appear in court Tuesday to face criminal negligence charges in the small Quebec town that was partially incinerated by exploding tanker cars.

The charges come about 10 months after more than 60 of the tankers carrying oil from North Dakota came loose in the middle of the night, sped downhill for nearly seven miles (11 kilometers) and derailed in the town of Lac-Megantic in eastern Quebec. At least five of the tankers exploded, leveling about 30 buildings, including a popular bar that was filled with revelers on July 6.

The Quebec provincial prosecutor's office said 47 counts of criminal negligence have been filed against engineer Thomas Harding, manager of train operations Jean Demaitre, and Richard Labrie, the railway's traffic controller, as well as against the Montreal, Maine and Atlantic Railway Ltd., the defunct railway at the heart of the disaster. The criminal charges, representing one count for each person killed, are the first brought in the disaster. Criminal negligence that causes death can result in a sentence of up to life imprisonment in Canada.

Rene Verret, a spokesman for the prosecutor, said the three railway employees were arrested late Monday afternoon. They are scheduled to appear in court on Tuesday in Lac-Megantic. A message left at MM&A offices was not immediately returned.

Thomas Walsh, Harding's lawyer, said his client will plead not guilty. Walsh said he had written to prosecutors several times asking that Harding to be allowed to turn himself if he was charged. Instead, Walsh said Harding was arrested by a SWAT team that swooped through his home and into his backyard, where he was working on his boat with a son and a friend. Police forced all three to drop to the ground.

"It was a complete piece of theatre that was totally unnecessary," Walsh told The Associated Press. "I realize that this has been a huge disaster, but this is not necessary for justice to be done. Whatever his legal responsibility may ultimately be ... this is not an easy thing to live with in the first place."

Prosecutors said in a statement that they decided to file the charges after an analysis of the evidence gathered at the scene.

The railroad blamed the engineer for failing to set enough brakes, allowing the train to begin rolling toward the lakeside town of 6,000.

Harding had left the train unattended overnight to sleep at an inn shortly before it barreled into Lac-Megantic.

The crash, the worst railway accident in Canada in nearly 150 years, prompted intense public pressure to make oil trains safer in the U.S. and Canada. Canada's transport minister said in April that the type of tankers involved in the disaster must be retired or retrofitted within three years because they are prone to rupturing. The oil industry has rapidly moved to using trains to transport oil in part because of oil booms in the Bakken region in North Dakota and in the oil sands in Alberta, and because of a lack of pipelines.

The arrests came just days before the closing of the sale of the bankrupt railroad.

The $15.85 million sale of MM&A is expected to close on Thursday in the U.S., but there could be a delay of a few days on a parallel proceeding in Canada. Most of the proceeds will be used to repay creditors. Eventually, there will be a settlement fund to compensate victims and repay cleanup costs.

The railroad's buyer, a subsidiary of New York-based Fortress Investment Group, is changing the railroad's name to Central Maine and Quebec Railway. The company said it hopes to recapture lost business but has no plans to try to bring back oil shipments.

A news conference is planned in Lac-Megantic on Tuesday regarding the rebuilding of the Musi-Cafe, the establishment in the heart of town where many people were incinerated.

Karine Blanchette, an employee at the cafe who lost friends and colleagues, said she's happy about the charges but nothing can erase the tragedy.

"Finally, there's justice," Blanchette said. "But it does not bring back the people we lost."