U.S. railroads forced to turn over details of their volatile crude oil shipments are asking states to sign agreements not to disclose the information. But some states are refusing, saying that the information shouldn't be kept from the public. 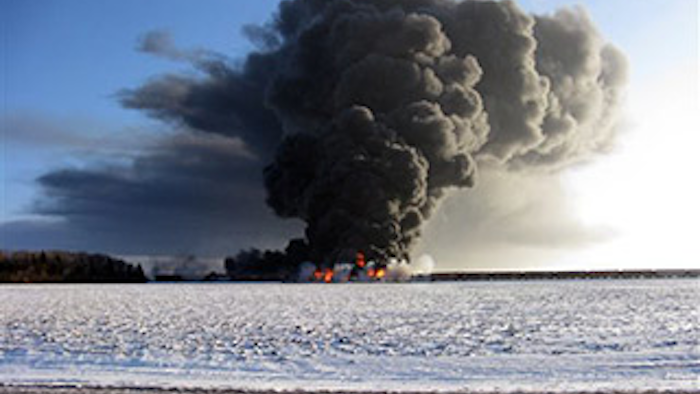 BILLINGS, Mont. (AP) — U.S. railroads forced to turn over details of their volatile crude oil shipments are asking states to sign agreements not to disclose the information. But some states are refusing, saying Thursday that the information shouldn't be kept from the public.

Federal officials last month ordered railroads to make the disclosures after a string of fiery tank-car accidents in North Dakota, Alabama, Virginia and Quebec, where 47 people died when a runaway oil train exploded in the town of Lac-Megantic.

The disclosures due midnight Saturday include route details, volumes of oil carried and emergency-response information for trains hauling 1 million gallons or more of crude. That's the equivalent of 35 tank cars.

BNSF, Union Pacific and CSX are seeking agreements that the information won't be publicly shared. They said the information is security sensitive and releasing it could put them at a competitive disadvantage.

State emergency officials said communities need to know about the trains and the proposed agreements would violate open-records laws.

"Our state statutes prohibit us from signing," said Lori Getter with Wisconsin Emergency Management. "It will help the responders to make sure they are fully prepared and trained to respond to a potential incident. But it's also good to let the community know."

In addition to Wisconsin, Montana, Illinois, North Dakota, Idaho and Washington state also have declined so far to sign the agreements, according to state emergency officials. Other states have said they intend to meet the railroads' requests.

In Colorado, South Dakota, Iowa and Oregon, the confidentiality proposals are under review by attorneys and no decision has been made, officials said. Officials in Virginia said they intend to make the information public.

U.S. crude oil shipments topped 110,000 carloads in the first quarter of 2014. That's an estimated 3.2 billion gallons of crude and the highest volume ever moved by rail, the Association of American Railroads said Thursday. It's spurred by booming production in the Northern Plains.

The May 7 federal order covered oil shipments by rail from the Bakken region of North Dakota, Montana and parts of Canada. The Bakken produces a light, sweet crude that is highly volatile and contains more flammable gases than heavier oils such as from the tar sands region of Canada.

Federal officials have said sharing information on Bakken shipments is crucial for local firefighters and other emergency responders to be prepared for accidents.

Railroads that fail to comply face penalties of $175,000 per day and a prohibition against moving Bakken oil. But officials indicated Thursday that there will be flexibility in how the rules are enforced.

"Although we will aggressively monitor compliance, we will also consider extenuating circumstances as railroads work with states to ensure information about the shipment of crude oil is appropriately provided," said Federal Railroad Administration Associate Administrator Kevin Thompson.

CSX spokesman Gary Sease said the company is providing the information now and asking that the confidentiality agreements be returned with 30 days.

"If the states do not provide those signed confidentiality agreements, we will not be able to provide subsequent updated information," Sease said. The agreements are necessary "for security reasons and for competitive reasons," he said.

Union Pacific also was providing the information to at least some states, but officials from several states said BNSF so far has not.

A BNSF spokeswoman said the railroad company will turn over information to states and will trust them to treat the data as confidential and provide it only to those with a "need to know" and with the understanding that those who receive it will continue to treat it as confidential.

"It is important to remember that the intent of the Emergency Order is to ensure first responders have access to necessary information so they can prepare their response plans," BNSF's Roxanne Butler said in a statement.

Louisiana, New Jersey and California officials said they do not intend to release the information they receive to the public. Louisiana State Police Capt. Doug Cain said there would be security concerns associated with releasing the routes, although the state plans to make sure local officials have the information.