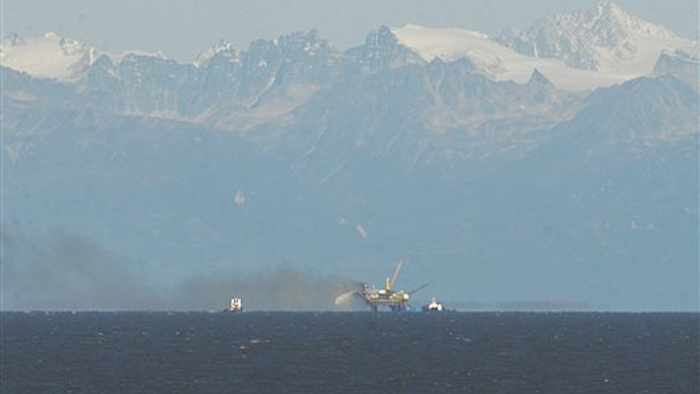 ANCHORAGE, Alaska (AP) — A fire Thursday at an offshore natural gas platform in Alaska's Cook Inlet destroyed the crew's living quarters and forced four workers to evacuate, but no one was injured and the environmental risk was considered minimal, responders said.

The blaze broke out at about 7:30 a.m. By evening, the unified command set up for the incident said the fire was fully contained. An earlier Coast Guard report that the fire flared up again was incorrect.

Hilcorp Alaska LLC owns the platform and 11 others among the total of 16 platforms in the inlet, a vast body of water with stunning mountain views.

The platform would be monitored through the night, the unified command including Hilcorp, the Coast Guard and the state Department of Environmental Conservation said in a statement.

No spill was reported at the scene about 45 miles southwest of Anchorage. The affected site, called the Baker platform, has only one active production well, and it was shut off remotely, according to Nelson.

A subsurface pipeline that carries the gas to the town of Nikiski also was closed.

The fire broke out during a morning safety meeting, Nelson said, and was not believed to be production-related.

All four workers who were evacuated were doing well, but they were medically evaluated to be sure, Nelson said.

"Once the response is complete and the platform is deemed safe for folks to be on board, we'll be cooperating in a full investigation with both federal and state authorities," she said.

The cause of the blaze was still under investigation, according to responders, who included Coast Guard and Alaska Department of Environmental Conservation personnel.

Mike McNeil, a Coast Guard civilian command duty officer in Anchorage, said the agency overheard radio communications by vessels reporting smoke in an area at 8:30 a.m. Hilcorp reported the fire after that.

The Coast Guard said five vessels were involved in fighting the fire and the agency dispatched a cutter, helicopter and another aircraft.

Cook Inlet stretches 180 miles from Anchorage to the Gulf of Alaska.

Cathy Foerster, one of three members of the Alaska Oil and Gas Conservation Commission, said the company has been considering whether to activate more wells in the inlet.

"Now they'll have to weigh into that consideration whatever costs are associated with fixing whatever the fire impact is," Foerster said.