Many Wary As Chemical Smell Lingers

For several days, a majority of Charleston-area residents have been told their water is safe to drink, that the concentration of a chemical used to wash coal is so low that it won't be harmful. But as long as people can still smell it, they're wary — and given the lack of knowledge about the chemical, some experts say their caution is justified. 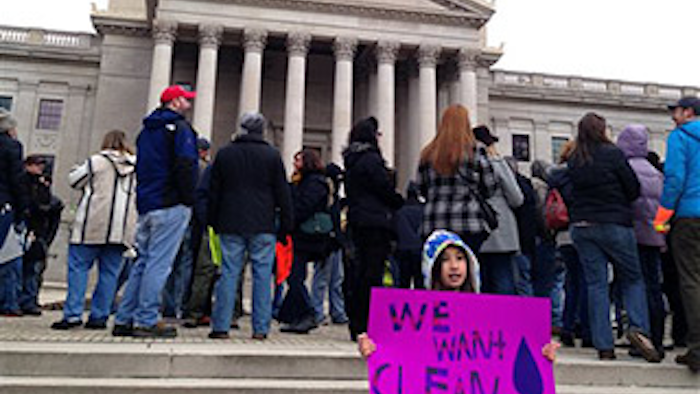 CHARLESTON, W.Va. (AP) — The smell lingers — the slightly sweet, slightly bitter odor of a chemical that contaminated the water supply of West Virginia's capital more than a week ago. It creeps out of faucets and shower heads. It wafts from the Elk River, the site of the spill. Sometimes it hangs in the cold nighttime air.

For several days, a majority of Charleston-area residents have been told their water is safe to drink, that the concentration of a chemical used to wash coal is so low that it won't be harmful. Restaurants have reopened — using tap water to wash dishes and produce, clean out their soda fountains and make ice.

But as long as people can still smell it, they're wary — and given the lack of knowledge about the chemical known as MCHM, some experts say their caution is justified.

"I would certainly be waiting until I couldn't smell it anymore, certainly to be drinking it," said Richard Denison, a scientist with the Environmental Defense Fund who has followed the spill closely. "I don't blame people at all for raising questions and wondering whether they can trust what's being told to them."

The Jan. 9 spill from a Freedom Industries facility on the banks of the Elk River, less than 2 miles upstream from Charleston's water treatment plant, led to a ban on water use that affected 300,000 people.

Four days later, officials started to lift the ban in one area after another, saying tap water was safe for drinking because the concentration of the chemical dipped below one part per million, even though the smell was still strong at that level. By Friday afternoon, nearly all of the 300,000 people impacted had been told the water was safe.

Late Wednesday, however, health officials issued different guidance for pregnant women, urging them not to drink tap water until the chemical is entirely undetectable. The Centers for Disease Control said it made that recommendation out of an abundance of caution because existing studies don't provide a complete picture of how the chemical affects humans.

For Sarah Bergstrom, a 29-year-old nurse who is four months pregnant with her second child, the news was devastating. She hasn't drunk the water since the spill, but she has taken showers.

"I cried myself to sleep (Wednesday) night. I was both angry and scared," she said. "This baby that we've wanted for so long, I'm now questioning — have I done something that could have harmed her?"

Bergstrom said she's fortunate that she can afford bottled water, which she intends to use for the foreseeable future.

"My biggest fear is for those mothers, those pregnant women out there who aren't able to go get enough bottled water for their family, who don't have the resources and don't have the knowledge base to know that this is not safe," she said.

Karen Bowling, West Virginia's secretary of Health and Human Resources, said pregnant women who drank the water before being told to avoid it should contact their doctors. For the rest of the population, Bowling said she is confident the tap water is not harmful.

"It's understandable that people are concerned. I don't want to minimize anybody's feelings about an issue as sensitive as this," said Bowling, who said she drank the tap water after it was declared safe. "It's hard to instill confidence when there's little known about the chemical, but at the same time we have to trust in the science of what's happening."

According to the health department, 411 patients have been treated at hospitals for symptoms that patients said came from exposure to the chemical, and 20 people have been admitted. Also, more than 1,600 people have called poison control to complain of symptoms. Bowling said the department is trying to sort out how many of those patients were actually sickened by the chemical, and not by other diseases.

Given the uncertainty, many people in this coal-dependent swath of central West Virginia known as ChemicalValley say avoiding the water is a prudent decision.

Jeff Duff, a 42-year-old contractor from South Charleston, is drinking bottled water and taking showers at his brother's house about 25 miles to the west, where the tap water comes from a different source.

"I'm not touching it," Duff said. "I just don't trust it. I don't think they know enough about it to give us a clear answer — not enough for my safety and my kids' safety."

Duff said his self-imposed ban also applies to eating at restaurants in the affected area because he's leery about residue left by the chemical on washed dishes.

The CDC relied on two studies of the chemical's effect on animals to establish the safe standard of one part per million, but data from them is not publicly available.

"This is a dynamic and moving event. There are many things happening. And we are trying to do our best," Dr. Vikas Kapil of the CDC's Agency for Toxic Substances and Disease Registry told reporters in a conference call Thursday. "There are uncertainties. There is little known about this material."

MCHM is one of tens of thousands of chemicals exempt from testing under the federal Toxic Substances Control Act because they were already in use when the law was approved in 1976. A fact sheet of available data on the chemical says there is no specific information about its toxic effects on humans. Its chances of causing cancer and its effects on reproductive health are unknown, according to the document and the CDC.

At a busy Charleston intersection a few blocks from West Virginia American Water's treatment plant, Barry Sean Rogers was recently staging a one-man protest with a sign that read: "Our water is unsafe. We are being lied to."

Rogers, 51, isn't using tap water at his downtown apartment until he gets some answers. He's drinking and bathing in bottled water, and when he leaves his apartment, he turns the taps on to flush out the pipes.

"If I turn it on, it drives me out of the apartment. It still smells. It's nasty. I get headaches, nausea," Rogers said.

The company blamed for the chemical spill, Freedom Industries, filed for bankruptcy Friday.