A northwestern Indiana police department became one of the first law enforcement agencies in the country to distribute a theft-deterring chemical that leaves DNA-like "signatures" on property and those who attempt to steal it. 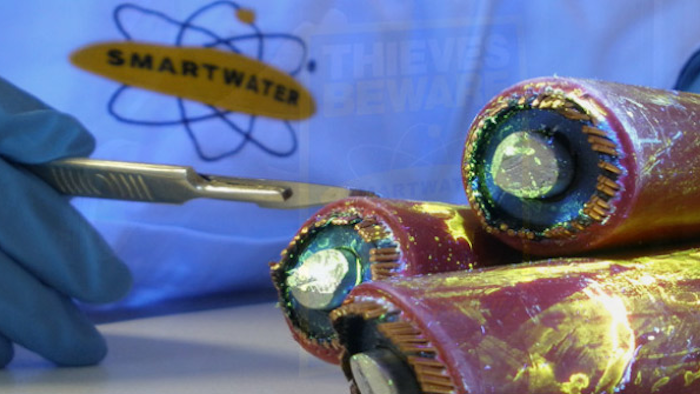 A northwestern Indiana police department on Tuesday became one of the first law enforcement agencies in the country to distribute a theft-deterring chemical that leaves DNA-like "signatures" on property and those who attempt to steal it.

Makers of SmartWater CSI say the product makes it easy to track stolen items and link thieves to crimes they've committed. Although it has seldom been used in the United States beyond Florida, company officials say it's been used in Europe for several years.

"I call it virtual DNA. It specifically ties that item or items to that individual owner. It's that specific," said Porter County Sheriff David Lain, who began distributing SmartWater through a local senior advocacy group Tuesday.

When treated with SmartWater, stolen valuables can be returned to their proper owner, its makers and supporters say. The chemical can be applied to items by owners or can be sprayed in a fine mist to mark burglars who try to enter property. It's invisible until placed under black light.

The company claims the substance, which is made from "rare earths and chemicals," can create up to 1 billion distinct chemical signatures.

After seeing a recent presentation on SmartWater, Lain was so convinced it would help discourage thieves that he ordered 150 vials at $35 each to be given away to seniors. Lain said Tuesday he is considering ordering 100 additional kits out of jail commissary funds.

"I think I want to go further. It's a matter of financing more than anything," Lain said.

The chemical also has been distributed in a neighborhood in Fort Lauderdale, Florida, where Police Chief Frank Adderley said he is considering expanding to two others.

Logan Pierson, president of the company's Fort Lauderdale-based U.S. operations, said traces of the chemical can stay on people for months. But whether it will hold up as evidence in court isn't known.

Pierson said SmartWater could be used in one case that may go to trial and has been a factor in several plea agreements, but he said the company expected legal challenges in the U.S. because it's a new product here.

A Florida law firm has offered to defend suspects who have been sprayed with SmartWater on the basis of its long-term effect.

Adderley said burglaries in one Fort Lauderdale neighborhood dropped 14 percent in one year after residents began using the substance. But he acknowledged that police also used tactics such as covert operations.

SmartWater's main value, supporters say, is as a deterrent.

Lain, the Porter County sheriff, is eager to see how the product works in his community.

"Everybody knows the value of DNA," Lain said. "So I think the idea of something having a marker that is individual and unique to an individual is something that people very much understand."