Union Pacific Railroad said it will replace a type of bolt on its track that led to a fiery oil train derailment on the Oregon-Washington border. 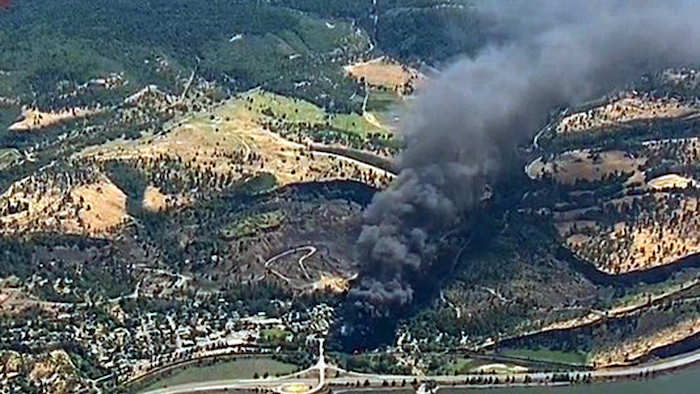 PORTLAND, Ore. (AP) — Union Pacific Railroad said it will replace a type of bolt on its track that led to a fiery oil train derailment on the Oregon-Washington border, but the pledge failed to ease concerns in the tiny town where the wreck sparked a massive fire that burned for 14 hours.

Federal investigators in a preliminary report released Thursday blamed the derailment on Union Pacific for failing to properly maintain its track.

The report flagged broken "lag bolts" as the immediate cause and said better inspections would have caught the issue. The lag bolt is part of a fastening system that attaches the rail to ties. It prevents the rails from moving too far apart, which can lead to derailments.

The document, obtained in advance by The Associated Press, came out a day after Union Pacific announced it would resume running oil trains in the Columbia River Gorge later this week.

The combined news shocked and angered residents in Mosier, a town of about 400 where the train went off the tracks. The June 3 derailment released 42,000 gallons of crude and prompted evacuations. No one was injured.

"I think it's outrageous that they're telling us it's safe," Mosier Mayor Arlene Burns said. "We are going to keep pushing until we feel that this has been properly addressed."

Advanced electronic brakes proposed by regulators but fought by the railroad industry could have made the derailment less severe, Federal Railroad Administrator Sarah Feinberg said. They could have reduced the number of cars that derailed and prevented the one that first burst into flames from being punctured, officials said.

"We're talking about upgrading a brake system that is from the Civil War era," Feinberg said. "It's not too much to ask these companies to improve their braking systems."

The Association of American Railroads has lobbied against new braking requirements, saying they are too unreliable and would yield too little benefit to justify a price tag topping $3 billion. Federal officials say putting new brakes just on locomotives hauling large loads of oil and other flammable liquids would cost far less, around $80 million.

Union Pacific said an upgraded braking system would not have made a difference in the Mosier derailment.

The company will replace the lag bolts with spikes on curved portions of its track nationwide as part of its track renewal program, said Justin Jacobs, Union Pacific spokesman. The bolts will be replaced on 530 miles of the company's 32,000-mile network, he said.

Union Pacific inspections just three days before the derailment failed to detect any problem with the bolts, Jacobs said. Spikes will be more visible than the bolts, which lie close to the ground, nestled in gravel on the rail bed, he said.

Hal Gard, rail and public transit administrator for the Oregon Department of Transportation, said he's been told Union Pacific will start replacing the bolts in the Columbia River Gorge in August.

The tank cars that broke open and burned had travelled thousands of miles from the Bakken oil fields of North Dakota and Montana, destined for coastal refineries.

A chorus of state, local and federal elected officials in Oregon has demanded a moratorium on crude-by-rail shipments until the derailment is fully understood. There are concerns the failure of the lag bolts could be a symptom of a larger, unknown problem. Oil trains have been running in the area only since 2014, state transportation officials said.

There was little prior focus on failed lag bolts, and there appears to be only one other instance in which they caused a derailment, in Canada's Alberta Province in 2012, Gard said, adding a further look is needed.

"The unit trains are big and very heavy, the cars are shorter, and the oil is sloshing around inside of those cars. Are there additional strains and dynamic forces associated with that that is different?" he said. "Now folks are getting down and twisting and kicking them and taking a hard look at those things."

Federal rail authorities have said they don't have the jurisdiction to ban oil trains in Oregon.

At least 27 oil trains have been involved in major derailments, fires or oil spills in the United States and Canada in the past decade, according to an AP analysis of accident records. The trains travel through more than 400 counties across the U.S. to reach refineries on the West, East and Gulf coasts.

A 2013 derailment killed 47 people when a runaway oil train from North Dakota jumped the tracks and exploded in Lac-Megantic, Quebec.

Rail consultant and former industry regulator Steven Ditmeyer said a series of Burlington Northern derailments in the 1990s in Washington state all involved sheared off railroad spikes. Investigators eventually determined overloaded cars, a lack of lubrication between the wheel assembly and the body of the tanker cars, and not enough gravel in the railroad bed combined to put strain on the track along curves.

That strain loosened the spikes holding the rails to the rail ties and pushed the rails apart, much like the recent Oregon derailment, he said.

Feinberg said tank cars that haul crude oil and other products have weight limits, but there's been no suggestion Union Pacific's cars exceeded them.

"Whether a railroad is moving heavy cars or lighter cars, it is still their responsibility to maintain the track," she said.