Using numerical modelling, researchers from Russia, the U.S. and China have discovered previously unknown features of rutile TiO2, which is a promising photocatalyst. 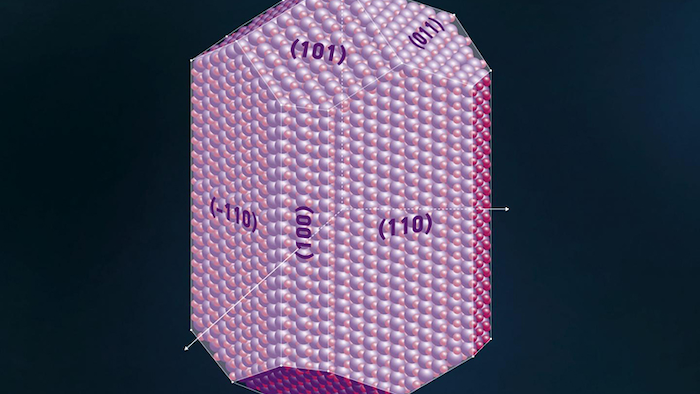 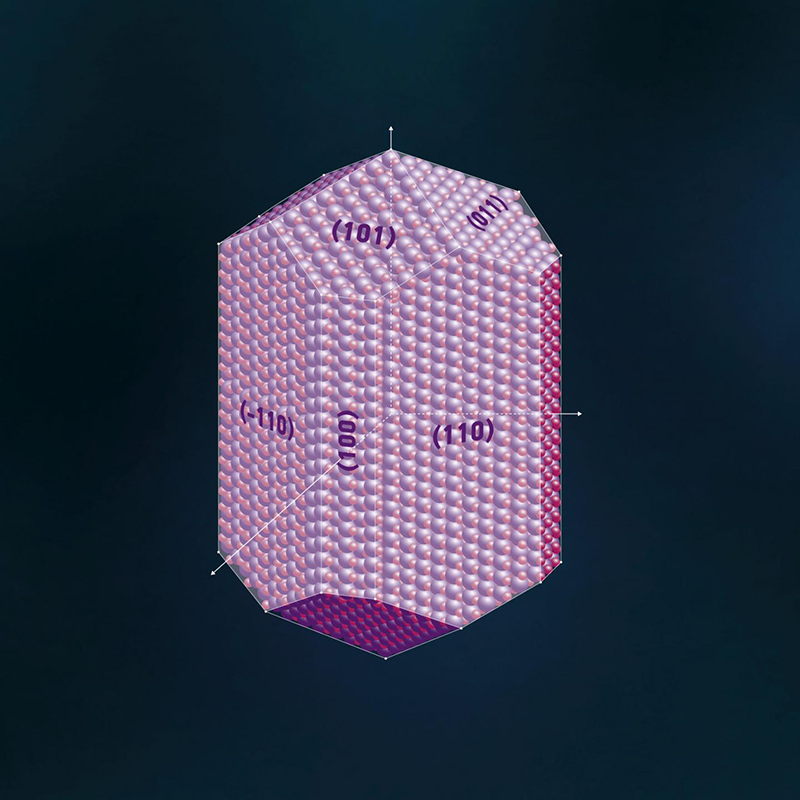 This is a visualization of planes in crystal. (Photo: MIPT)

Using numerical modelling, researchers from Russia, the U.S. and China have discovered previously unknown features of rutile TiO2, which is a promising photocatalyst. The calculations were performed at an MIPT laboratory on the supercomputer Rurik. The paper detailing the results has been published in the journal Physical Chemistry Chemical Physics.

It's All on the Surface

Special substances called catalysts are needed to accelerate or induce certain chemical reactions. Titanium dioxide (TiO2) is a good photocatalyst - when exposed to light it effectively breaks down water molecules, as well as hazardous organic contaminants. TiO2 is naturally found in the form of rutile and other minerals. One of the two most active surfaces of rutile R-TiO2 is a surface that is denoted as (011). The photocatalytic activity is linked to the way in which oxygen and titanium atoms are arranged on the surface. This is why it is important to understand which forms the surface of rutile can take.

Compared to in the bulk, atoms on the surface have fewer neighbours and more dangling bonds, which means they have to regroup — the atomic structure undergoes a process of reconstruction. From previous experiments with rutile, the scientists knew that on the surface of R-TiO2(011) the most common reconstruction is (2×1), where the distance between atoms in one direction is doubled and in the other direction remains unchanged. When this surface was irradiated with a beam of accelerated electrons, the top oxygen atoms broke away and left one-dimensional rows (with a width of one atom) of empty spaces on the surface. These rows, known as oxygen vacancies, can increase the chemical reactivity of the surface.

The physicists also used data on the discovery of metastable forms of R-TiO2(011)-(2×1) — their existence is thermodynamically unfavourable under current conditions, but they do not rearrange themselves at the first opportunity, in the same way that supercooled water does not freeze in the absence of external disturbances. A number of models were proposed previously for the reconstruction of R-TiO2(011)-(2×1), but not all of them were consistent with the experimental data and had a reasonable structure.

The way in which the surface forms is not only affected by a particular environment, but also by the regrouping process of the atoms. Using special software and ab initio methods (computer modelling based on the fundamental laws of quantum mechanics), the scientists constructed a surface phase diagram — the dependence of surface energy on composition — and used it to determine which forms are metastable.

In addition, the researchers calculated the surface stress - the force acting on atoms on the surface - for the unreconstructed surface of rutile R-TiO2(011). These calculations led the scientists to conclude that R-TiO2(011) and the previously predicted titanyl-TiO2 and B(001)-TiO2 reconstructions must be metastable. To test the conclusion, the researchers modelled images of the surface of rutile R-TiO2(011) that could be obtained when studying samples with a scanning tunneling microscope. The simulated STM images were compared with images from real experiments.

The physicists found that the formation of B(001)-TiO2 and titanyl-TiO2 reconstructions is caused by surface stress; they concluded that these structures are metastable. The models developed were similar to those previously proposed, but their existence is more reasonable. The MF(111)-TiO model is less rich in oxygen than MF(111)-TiO3, and it explains why the reconstruction was observed in an oxygen-poor environment, i.e. in a vacuum at a high temperature. The titanyl-Ti2O3 model contains one-dimensional rows of oxygen vacancies, which led the scientists to suggest that the titanyl-TiO2 and titanyl-Ti2O3 reconstructions are formed before and after electron radiation respectively. The authors also suggested three new structures.

In terms of chemistry, rutile exhibits properties that are typical for acids. However, there is still no definitive explanation as to why this happens and why water is split into hydrogen and oxygen on the surface of rutile when it is exposed to light. The water breakdown reaction will help in producing environmentally-friendly fuel — hydrogen. TiO2 and light can also be used to purify and disinfect water, air and other aqueous media. The authors of the study hope that their calculations will not only expand existing knowledge on the atomic structure of the surface of titanium dioxide, but will also provide a better understanding of its photocatalytic properties.

The corresponding author of the paper, Qinggao Wang, says, "The richness of surface phases is due to a combination of thermodynamic conditions and the effect of surface stress. Most importantly, we have emphasized the role of kinetics and analysed the metastability of surface structures, which has significantly broadened our current understanding."