Shareholders at Exxon's annual meeting rejected several resolutions backed by environmentalists that would have pushed the company to take a stronger stand in favor of steps to limit climate change. 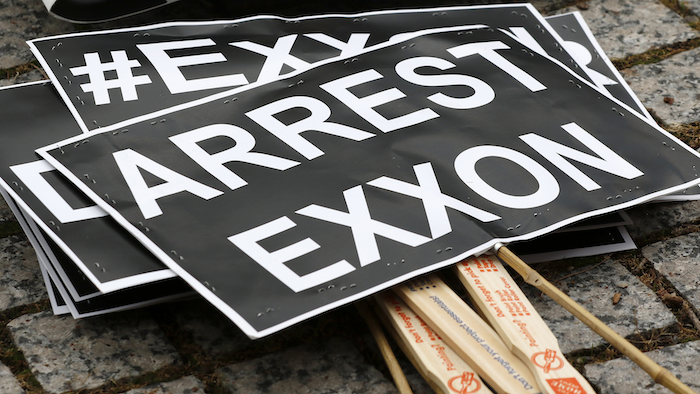 DALLAS (AP) — Shareholders at Exxon's annual meeting rejected several resolutions backed by environmentalists that would have pushed the company to take a stronger stand in favor of steps to limit climate change.

Over the board's opposition, shareholders voted to ask directors to adopt a proxy-access rule, which would make it easier for shareholders to propose board candidates and remove incumbent directors.

Wednesday's meeting occurred as Exxon Mobil Corp. faces volatile crude prices. After the price collapse that began in mid-2014, Exxon earned $16.15 billion last year, its smallest profit since 2002. Crude prices have rebounded since February but remain about half of what they were at their last peak.

Exxon is also dealing with investigations by officials in several states into what the company knew and allegedly didn't disclose about oil's role in climate change.

Shareholders rejected resolutions including a policy to limit global warming, put a climate expert on the board, and report on the drilling method known as hydraulic fracturing or fracking. Backers were encouraged, however, that a climate-change resolution won 38 percent support. The measure called on Exxon to support the goal of a U.N. meeting in Paris last year to limit global warming to 2 degrees Celsius above pre-industrial levels.

"In opposing this resolution, our company has chosen to disregard the consensus of the scientific community, the will of the 195 nations that signed the Paris agreement," religious leaders and even other oil companies, Daley said.

Tillerson said Exxon has long realized that the risk of climate change is serious and might require action. But, he said, any policies must be implemented evenly across the world, allow market prices to pick solutions, and be flexible enough to respond to economic ups and downs and "new discoveries and breakthroughs in climate science."

Exxon forecasts that oil and gas will make up 60 percent of the world's energy supply in 2040 — about the same share it holds today.

Tillerson said there is no alternative source that can replace the ubiquity of fossil fuels. He expressed confidence that technology will provide the key to limiting carbon emissions.

"We've got to have some technological breakthroughs," he said, "but until we achieve those, to just say turn the taps off is not acceptable to humanity," he said.

The shareholders responded with robust applause.

Across the street from the meeting hall, about 60 protesters gathered and urged large shareholders such as pension funds to divest their shares. Many held signs with slogans such as "Exxon Liar Liar Earth on Fire." The mood was sedate, however, perhaps owing to the warm, muggy weather.