A petroleum tanker laden with 175,000 barrels of North Dakota crude was being offloaded in Europe on Wednesday, the first such overseas shipment of the state's oil since Congress lifted a 40-year ban on crude exports in December. 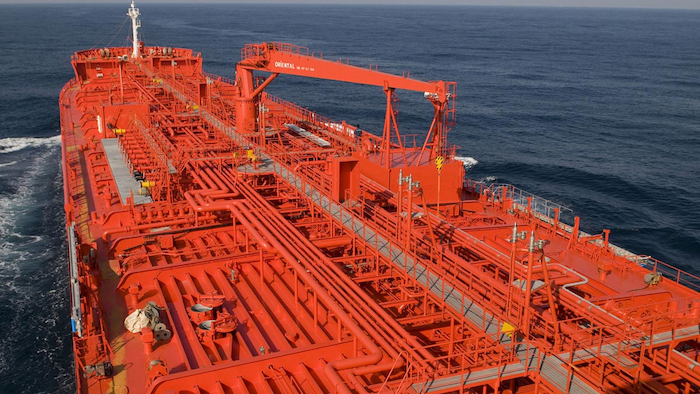 BISMARCK, N.D. (AP) — A petroleum tanker laden with 175,000 barrels of North Dakota crude was being offloaded in Europe on Wednesday, the first such overseas shipment of the state's oil since Congress lifted a 40-year ban on crude exports in December.

North Dakota's congressional delegation and industry officials hailed Hess Corp.'s shipment as a milestone that could open more markets in faraway refineries where premium prices are typically fetched based on foreign prices.

"It's a big deal," said Ron Ness, president of the North Dakota Petroleum Council, a trade group that represents about 500 companies working in the oil patch in the western part of the state. "Once you get a barrel to sea, it will fetch a better price."

The ban on crude exports was put in place in response to the energy crisis of the 1970s. It's not immediately clear what impact exporting North Dakota oil will have on prices or production, which is currently pegged at about 1.1 million barrels daily. And environmental groups have said they worry that increased supply by U.S. energy companies will lead to more pollution and higher global emissions.

Hess spokesman John Roper said the crude originated from Tioga, North Dakota in early April. It was shipped by rail to St. James, Louisiana. There, it was loaded on a tanker with ExxonMobile Corp.'s offshore oil from the Gulf of Mexico.

The tanker arrived early this week in Rotterdam, Netherlands, where ExxonMobile has a refinery, Roper said. Workers were unloading the shipment Wednesday, he said.

Hess, formerly was known as Amerada Hess, is based in New York. Amerada Hess was the first company to strike oil in North Dakota in April, 1951. The oil that reached Europe was loaded at a rail facility owned by Hess and not far from where the company first found oil beneath a farmer's wheat field 65 years ago.

North Dakota is the nation's No. 2 producer behind Texas. Drilling has slowed in the North Dakota due to slumping oil prices, and tax revenue for the state has fallen as a result. There were 28 rigs drilling in the state on Wednesday, compared with 92 on the same day one year ago.

Roper would not disclose if the company intended to increase its North Dakota crude shipments abroad.

"Where crude goes is where it gets the best value," Roper said. "We are always seeking higher value. When the value is right, we will definitely do it."

The company has said that producers could earn up to $14 more per barrel for domestic sweet crude by selling it on the world market.

Ness, president of North Dakota oil trade group, said the state's light, sweet crude faces competition in those markets from similar high-quality crude from the Eagle Ford formation in Texas. Most domestic refineries are built to handle lesser-quality heavy crudes from the U.S. and Canada.

Oilmen in North Dakota have long complained that North Dakota's filet mignon-like oil has been sold at hamburger prices.

"The whole world is a market now," he said.