The Tacoma project was the largest of three methanol refineries proposed by the company to convert natural gas to methanol, which would then be shipped to China to make plastics and other consumer goods. 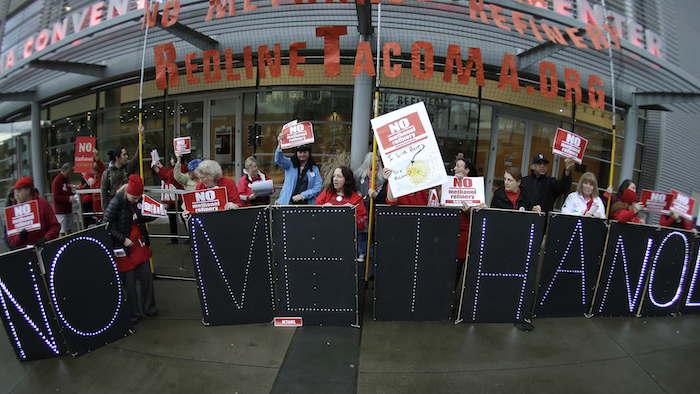 SEATTLE (AP) — A China-backed consortium on Tuesday canceled plans to build a $3.4 billion methanol plant in Washington state, but said it is committed to building two other facilities in the Pacific Northwest.

Northwest Innovation Works ended its lease with the Port of Tacoma, citing regulatory and other issues related to developing the land, the site of a former aluminum smelter.

The company also said it would take at least three more years — longer than anticipated — to complete an environmental review and there wasn't enough time under the current port lease to do that.

The Tacoma project was the largest of three methanol refineries proposed by the company to convert natural gas to methanol, which would then be shipped to China to make plastics and other consumer goods. The plant would have produced 20,000 metric tons a day and dwarf other methanol plants planned or being built in the U.S.

The company said Tuesday it is committed to developing methanol plants in Kalama, Washington, and St. Helens, Oregon.

Supporters have said the projects would create hundreds of jobs and infuse billions of dollars into the region. Washington Gov. Jay Inslee had embraced them as a boost to the state's clean energy future.

But the Tacoma project faced vocal opposition from those concerned about environmental and health impacts.

More than 1,000 people attended a hearing in early February. About 1 ½ weeks later, the company put the project on hold, saying it "had been surprised by the tone and substance of the vocal opposition."

"Given sufficient time, we believe we would have been able to satisfy most of the local citizens' concerns and questions through the public participation process, and correct a lot of the misinformation swirling about regarding potential impacts of our project," Vee Godley, the company's president said in a statement Tuesday.

Methanol, a wood alcohol, is used to make olefins, a component in everyday products such as eyeglasses, insulin pumps and fleece jackets. Most methanol in China is produced using coal, but the Northwest plants would use natural gas.

Claudia Riedener, with the citizens' opposition group Red Line Tacoma, said the entire process of taking natural gas from Canada, piping it to Tacoma, converting it to methanol and shipping it to China to make plastics was not sustainable.

"There was nothing in it for Tacoma," she said. "We're elated. It's celebration time."