New Plan to Clean River Polluted Where Agent Orange Was Made

The federal government has unveiled a revised plan to clean up a heavily contaminated stretch of a river where Agent Orange was made. 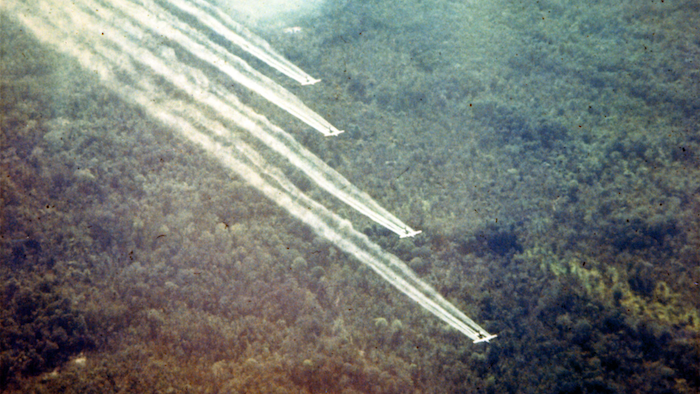 NEWARK, N.J. (AP) — The federal government has unveiled a revised plan to clean up a heavily contaminated stretch of a river where Agent Orange was made.

The plan, unveiled Friday by the Environmental Protection Agency, calls for about 20 percent less contaminated Passaic River mud to be removed compared with a proposal introduced two years ago. The change led to complaints from environmental groups.

The river runs through northern New Jersey and the heart of what was one of the nation's busiest industrial areas, and its sediment bears witness to the history. The material includes several dangerous chemicals that were put into the water by more than 100 factories that were on the banks of the river over a century, including the Diamond Alkali facility in Newark that produced Agent Orange, a highly toxic herbicide used during the Vietnam War to remove vegetation that provided enemy cover.

The river's sediment is seriously contaminated with dioxin, polychlorinated biphenyl, heavy metals, pesticides and other contaminants. Under the plan, cleanup costs will be reduced from $1.7 billion to about $1.38 billion.

The sediment would be transported to facilities in another state or Canada. Material containing dioxin would be incinerated, and the rest would be buried in a hazardous-waste landfill

Democratic U.S. Sen. Cory Booker cited the "greed and evil" of companies that had polluted the river.

"I'm happy that a pittance of $1.4 billion is being put in to resurrect this river, but the crime that has been done to this city, someone should pay for that," Booker said.

The 11-year cleanup would still be one of the most expensive Superfund site cleanups in history. Negotiations with the 100 companies that polluted the river or inherited the liability of past polluters are continuing over the costs of the cleanup, officials said.

"The EPA's cleanup plan will improve water quality, protect public health, revitalize waterfront areas and create hundreds of new jobs," EPA regional administrator Judith Enck said. "This plan is one of the most comprehensive in the nation and will help restore a badly damaged river."

Jeff Tittel, director of the New Jersey Sierra Club, said the environmental group continues to urge the EPA to completely remove the contamination. He said the EPA's latest plan is more about "political expedience" than what's best for the river.

"This plan is not cleaning up the contamination and is keeping communities held hostage to toxic pollution," Tittel said. "This cleanup plan is more about political science than real science and will continue to poison communities along the river."