Many Chemicals Used in Texas Fracking Remain a Mystery

"There's a lot of complex chemistry going on down there," a co-author of a recent study on fracking chemicals said. "Some of these are pretty exotic molecules. If we knew what they were, it would be a lot easier to track." 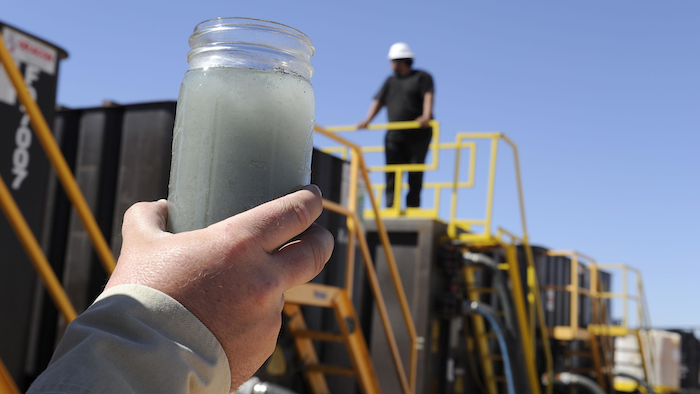 HOUSTON (AP) — For the past five years, biochemist Zac Hildenbrand has investigated potential links between unconventional drilling and water quality, collecting thousands of samples throughout the major shale plays in Texas.

Some of the results, he said, are worrisome. As part of a collaboration with researchers at the University of Texas at Arlington, Hildenbrand has identified water wells with high levels of chlorinated solvents, alcohols and compounds commonly found in petroleum products.

Hildenbrand also has come across more "exotic" molecules in his research, he said. But his efforts to identify some of them have been hampered by what critics describe as a "loophole" in a state law requiring companies to publicly disclose the ingredients in their hydraulic fracturing fluid.

The Texas law allows companies to withhold specific chemicals by labeling them as proprietary. Operators in Texas have invoked the exemption to shield, at least partly, the identities of more than 170,000 ingredients from when the law took effect in February 2012 through April, an analysis of the disclosure records shows.

Hydraulic fracturing involves injecting a cocktail of fluid, typically about 99 percent water, down a wellbore and into tight rock formations to help release oil and gas.

The practice has revolutionized the American energy industry, but some environmentalists and public health officials have expressed concern about potential public exposure.

A provision in Texas law requires the disclosure of chemicals listed as trade secrets to emergency personnel, but not to toxicologists or academics. That has left researchers like Hildenbrand frustrated with FracFocus, the Internet clearinghouse used by Texas and at least 20 other states for public disclosure of ingredients in fracking fluid. 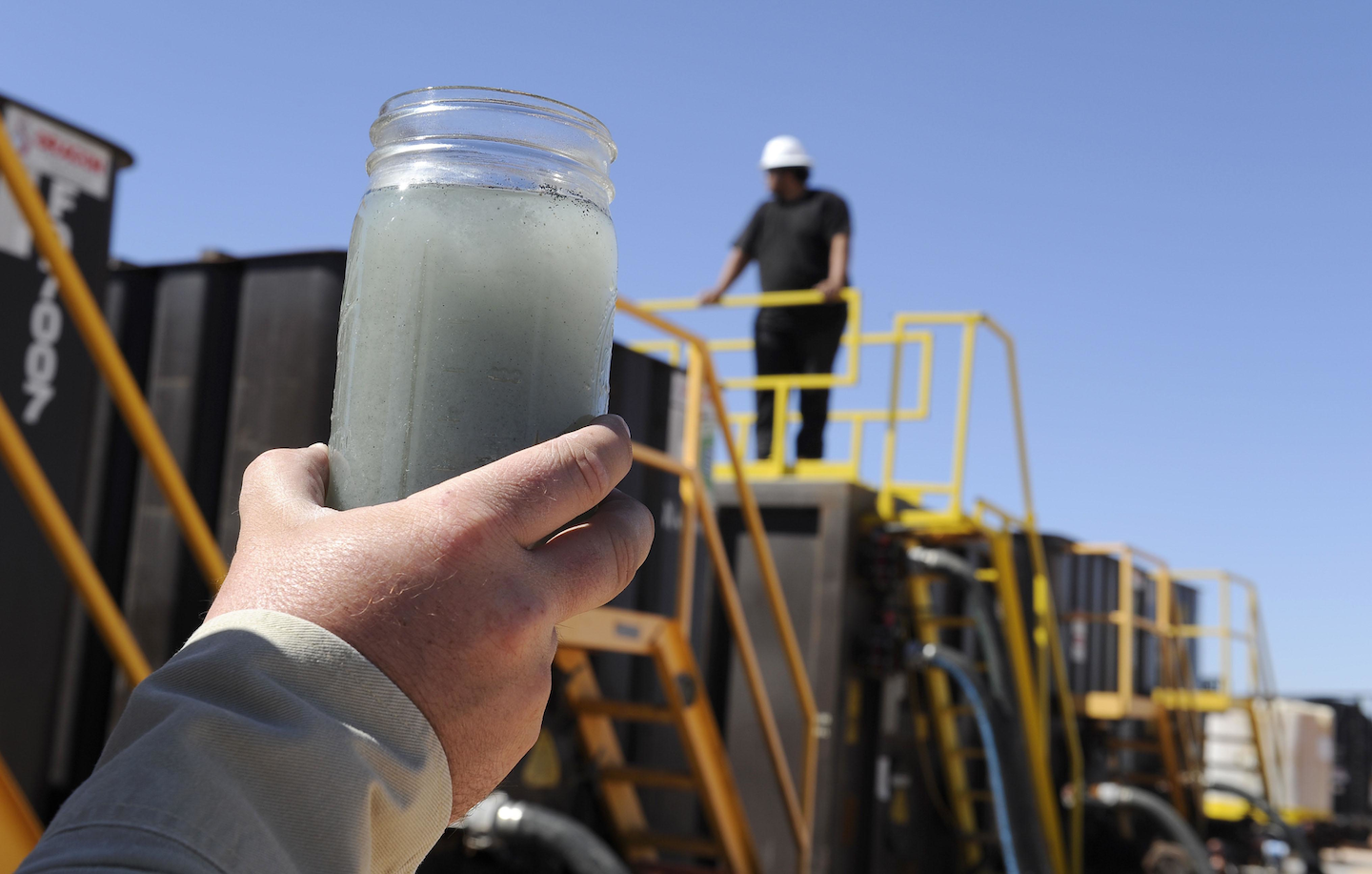 "More often than not, the information is either labeled as a 'trade secret' or 'proprietary,' " he told the Houston Chronicle. "It would be great if we knew what chemicals were actually being used."

The law leaves researchers like Hildenbrand powerless to challenge exemptions.

But it gives state agencies, including the Texas Railroad Commission, the power to question them.

So far, TRC spokeswoman Ramona Nye said, the agency "has had no reason to challenge a claim."

Texas officials say the hydraulic fracturing fluids aren't making it into the groundwater.

Fracturing generally occurs a mile or more below aquifers, with thousands of feet of rock serving as a buffer between fluids and groundwater, TRC officials say. No groundwater contamination case has been linked conclusively to hydraulic fracturing, Nye said.

The lack of TRC challenges to the exemption didn't sit well with Lon Burnam, a former state legislator from Fort Worth who co-authored the legislation and now is running for the Railroad Commission.

"It's an outrage that there is nobody in the agency in a powerful enough position who says, 'This has got to be checked,' " Burnam said.

Burnam, a Democrat, said public disclosure is critical because of a recent string of cases of alleged water contamination by Texans living near drill sites.

Texas was among the first states in the country in 2011 to pass a hydraulic fracturing disclosure law, which supporters called a popular and landmark piece of legislation designed to improve transparency.

Environmentalists complained, though, that the Texas legislation gave industry-wide latitude in deciding what ingredients to make public.

They zeroed in on the exemption for proprietary ingredients, arguing companies should not be determining what constitutes a trade secret.

Burnam, the former legislator who co-authored the bill, said it was "something I was embarrassed to have settled for after the fact."

"There is a gaping hole in the legislation big enough to drive a Mac truck through," he said.

"It's been a model for success," said Steve Everley, spokesman for Energy In Depth, a research arm of the Independent Petroleum Association of America (IPAA).

Everley said disclosing the full list of ingredients in fracking fluid — sometimes referred to as "secret sauce" within industry circles — could put operators at risk of revealing proprietary information, and leave them at a competitive disadvantage.

"Confidential business information is a critical part of innovation, research and development in the industry," Everley said. "With hydraulic fracturing specifically, companies are developing more benign fluids, different additives that are sourced from food products, that research and development is millions and millions of dollars, and that doesn't happen if there are no proprietary protections."

In addition to state agencies, private citizens who own land on or adjacent to where the wells are drilled are able to challenge companies' trade secret claims.

Nye, the TRC spokeswoman, said no citizen has filed such a challenge. There are no instructions on how to challenge a trade secret claim on the Railroad Commissions' FAQ page on hydraulic fracturing, though the agency's rule, available on the website, describes that process.

Bhandari said she'd never heard there was a mechanism to challenge companies that refuse to fully disclose ingredients.

"I think it's very important for people who live in the community to know what chemicals are being used, and what the toxic effects may be," she said.

Everley, with the Independent Petroleum Association of America, said the lack of challenges shows that people are not that concerned about it. They could find out about the process by simply reading the law, he added.

"If we're trying to suggest there is controversy here about people not knowing, and being left in the dark and being worried, where are all of the challenges to these claims?" he asked.

A recent Harvard University analysis of FracFocus records found companies are withholding the identities of more chemicals now than they were three years ago.

The EPA reported that companies withheld 11 percent of ingredients from January 2011 through February 2013, based on the agency's analysis of FracFocus disclosures.

Kate Konschnik, a co-author of the study and the director of Harvard Law School's Environmental Policy Initiative, noted improvements in the quality of data in FracFocus, including fewer clerical errors. But, she said, "there were lower rates of disclosure across the board."

Everley said the Harvard analysis fails to account for some companies' partial disclosure of ingredients. For example, he said, some companies may list "borate salts" as an ingredient, but decline to disclose the specific chemical number, citing a "trade secret" exemption. That, he said, should still give the public a good idea of what is being put down a wellbore.

Konschnik said some major companies, including Houston-based Baker Hughes, have adopted an alternative reporting method that appears to be improving disclosure.

In 2014, Backer Hughes became the first major oil field services company to reveal all of the chemicals it uses in hydraulic fracturing. It got around trade secret concerns by disclosing the chemicals without attributing them to specific products in the fracturing fluid.

Hildenbrand, the biochemist who advises UTArlington's Collaborative Laboratories for Environmental Analysis and Remediation, started testing wells in the Barnett Shale in 2011. He said water wells closer to nearby gas wells stimulated by hydraulic fracturing had higher concentrations of heavy metals — including arsenic, strontium and barium.

In 2014, a follow-up study in the Barnett Shale found about 20 percent of samples had "some form of contamination that could be linked to drilling-related activities," he said.

He said he understands why companies need to protect trade secrets.

"There's a lot of value in that information from company to company and operator to operator," he said. "So if they want to keep a competitive advantage they have to keep a lid on that."

If scientists have closer cooperation with industry, he said, they could pinpoint potential contamination more quickly.

"There's a lot of complex chemistry going on down there," he said. "Some of these are pretty exotic molecules. If we knew what they were, it would be a lot easier to track. It could help identify problems right away."