Two years after thousands of gallons of a coal-cleaning agent leaked into the drinking water supply of 300,000 West Virginians, the sentencings of six officials at a chemical distributor this month will bring to a close criminal cases in the spill. 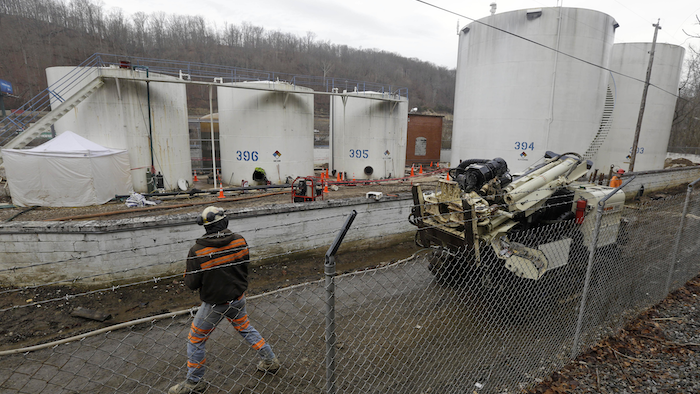 This Monday Jan. 13, 2014 file photo shows a worker moves a drilling machine around storage tanks at Freedom Industries storage facility in Charleston, W.Va. Two years after thousands of gallons of a coal-cleaning agent leaked into the drinking water supply of 300,000 West Virginians, the sentencings of six officials at a chemical distributor in February brings a closure to criminal cases in the spill. (AP Photo/Steve Helber)

CHARLESTON, W.Va. (AP) — Two years after thousands of gallons of a coal-cleaning agent leaked into the drinking water supply of 300,000 West Virginians, the sentencings of six officials at a chemical distributor this month will bring to a close criminal cases in the spill.

For residents who never met those men, the saga won't ever be forgotten.

It began when a licorice odor was noticed along the Elk River in Charleston the morning of Jan. 9, 2014. The smell was pinpointed to a leak of the coal-cleaning agent MCHM at a series of Freedom Industries tanks less than 2 miles upstream from West Virginia American Water's intake.

By nightfall, state officials declared a state of emergency, telling residents in a nine-county area served by the water company to avoid using their tap water except for flushing toilets and putting out fires.

Residents immediately cleared store shelves of bottled water, and suppliers sent in truckloads of water for residents to use in the coming days. Many restaurants were forced to close or cut back services temporarily.

The tap water advisory remained in place for up to 10 days while homes and businesses systematically flushed the chemical from their lines.

Before the advisory was lifted, Freedom filed for bankruptcy.

The first to be sentenced for negligent discharge of a pollutant this week are Freedom plant manager Michael Burdette on Monday and environmental consultant Robert Reynolds on Wednesday. Each faces up to a year in prison and a minimum $2,500 fine. The company faces up to $900,000 in fines at a hearing Thursday.

Southern, Freedom's president, faces the harshest penalty: up to three years in prison and $300,000 in fines.

"I think every one of them should be sentenced to the maximum," said Rhonda Mullins of Charleston. "They didn't have to live through that."

During the tap-water ban, Mullins said her daughter brought her several gallons of bottled water daily for drinking, and Mullins took water from a nearby creek and boiled it to wash dishes. Her daughter lives outside the spill zone and took Mullins' dirty clothes home with her to do laundry.

Mullins said she was fortunate at the time that she wasn't babysitting her young grandson.

"I think about all the young mothers that did have little newborns," Mullins said. "You know that was a mess."

For more than a decade, officials had been aware of critical deficiencies at the Freedom site, including a cracked containment wall that let chemicals seep through down a bank into the river, according to an FBI affidavit. But improvements to the wall weren't made.

Tis, Herzing and Farrell owned Freedom until December 2013, when they sold it to Pennsylvania-based Chemstream Holdings for $20 million. Southern became president afterward, but he was in charge of Freedom's day-to-day operations for years beforehand.

Prosecutors portrayed Southern as a wealthy businessman who cared little about safety. Southern appeared unsympathetic when he told reporters a day after the spill that he had had a "long day" and tried to leave a news conference multiple times outside the tank facility. He also drank a bottle of water in front of TV cameras.

Former U.S. Attorney Booth Goodwin, who resigned last month to run in May's West Virginia primary for governor as a Democrat, said the spill served as "a wake-up call" to the vulnerability of tap water systems and cast "a spotlight on the issue of our water security here in this nation."

"We need to ask ourselves if we're any safer in terms of our water infrastructure than we were in January of 2014," he said. "I think it's something that certainly not only tank owners need to be concerned about, but the folks who provide our lifeblood — our water."

Hundreds of people went to emergency rooms complaining of symptoms that could be spill-related, ranging from nausea to dizziness. Many claimed illnesses even after their water was deemed safe again.

Under a Freedom liquidation plan approved by a federal bankruptcy judge in October, more than $2 million will be distributed to residents and businesses affected by the spill.

A federal class-action lawsuit is set for trial in July, pitting affected residents and businesses against West Virginia American Water, its parent company and chemical manufacturer Eastman Chemical. In a related proposed settlement, Southern would pay $350,000 and Farrell would pay $50,000.