Libya Lost $68B From Attacks on Oil, Industry Chief Says

Libya will fall further into chaos if its factions don't quickly form a unity government, the head of the state oil company warned Monday, noting the country has already lost some $68 billion in oil sales amid political infighting. 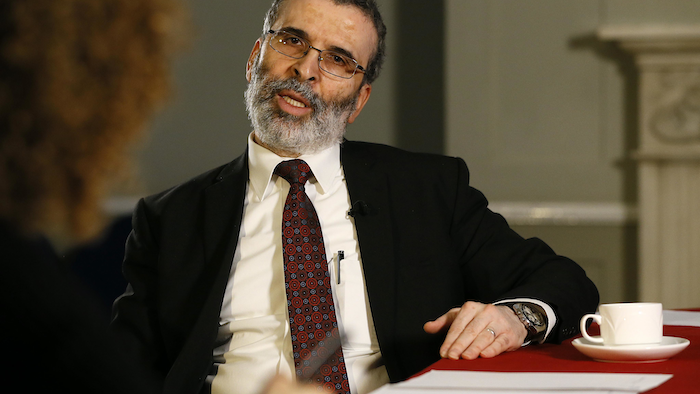 Libyan national oil company chief Mustafa Sanalla talks during an interview in London, Monday, Jan. 25, 2016. The head of Libya’s state oil corporation is appealing for political factions to forge a unity government, saying that without a single government there will be “neither security nor stability. Mustafa Sanalla believes that the country will become a failed state without action soon.(AP Photo/Kirsty Wigglesworth)

LONDON (AP) — Libya will fall further into chaos if its factions don't quickly form a unity government, the head of the state oil company warned Monday, noting the country has already lost some $68 billion in oil sales amid political infighting.

Mustafa Sanalla, who is in London to attend a conference and get support from investors, made his comments just after the internationally recognized parliament in the divided country rejected a plan to move toward a unified government. The vote underscored the turmoil that continues to wrack Libya.

Sanalla argued that without a single government, there will be "neither security nor stability."

"This vacuum will permit the other terrorist group and extremist groups to step in," he told The Associated Press.

The appeal came a week after representatives of Libya's rival factions announced they would attempt to create a government of unity to stabilize a country engulfed in chaos since the 2011 death of dictator Moammar Gadhafi. The United Nations is trying to broker a single government featuring the country's two factions — the Islamist one in the capital, Tripoli, and the internationally backed one in the eastern part of the country.

With each side backed by its own fighters, the Libyans allied with the Islamic State group have gained strength, claiming responsibility for a series of deadly attacks and attacking oil terminals and fields, the sole source of Libya's wealth.

"This problem in Libya, it is not so sophisticated," Sanalla said after the first day of the conference at Chatham House. "We have two factions in Libya. They are not looking (out) for the interests of Libya, unfortunately."

Aside from the obvious turmoil a dysfunctional government provides, the troubles also mean extremists are gaining strength. Islamic State militants have been attacking Libyan oil facilities since the start of the year.

Sanalla said the group doesn't want to hold the facilities, but disable them. His $68 billion estimate of lost production and exports since 2013 does not include damage and losses from the fire at the big port of Ras Lanuf last week or to any other facilities.

Instead of blaming Islamic State alone, he levelled his most harsh criticisms at the Petroleum Facilities Guard, the force that is meant to protect oil facilities.

Describing the 27,000 member force as more of a hindrance than an asset to keeping such sites secure, he suggested that while they may not be directly allied to Islamic State, they share the same goal: keeping the country destabilized.

He demanded that the guards be incorporated into a professional and unified structure Islamic State will "attack and destroy more facilities." He suggested that with their ouster, production would be doubled within days.

Production levels are now a far cry from the 1.61 million barrels a day before the rebellion in 2011.

The guards are led by a militia commander, Ibrahim Jedran, who is a strong advocate for a semi-autonomous region in eastern Libya and who in 2014 tried to unilaterally sell oil against the will of the central government at a time before it split into two factions.

The issues with Libya's stability also have broader consequences.

Libya is separated from Italy by a single body of water, the Mediterranean Sea, and with the continent already facing its worst migrant crisis in a generation, policymakers would greatly welcome a stable government that could stanch the flow at key ports that serve as a jumping-off point to Europe.

Sanalla said the country will move toward prosperity or descend into chaos.

"Libya is at the junction of the road," he said.