Gut Instinct: The Unexpected Place Where Plant Waste is Turned Into Value-Added Chemcials

Answers to the world's impending climate, energy and health needs may come not just from novel materials and emerging technologies, but also from rather more unexpected places. Such as the inside of an animal's gut. 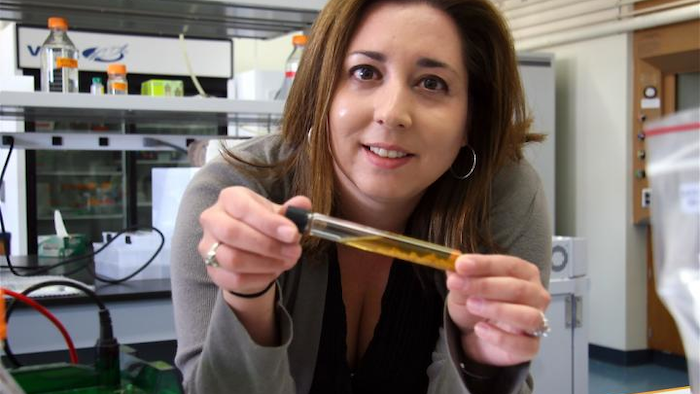 Answers to the world's impending climate, energy and health needs may come not just from novel materials and emerging technologies, but also from rather more unexpected places. Such as the inside of an animal's gut.

Research conducted by UC Santa Barbara professor of chemical engineering Michelle O'Malley has shown that anaerobic microbes perform interesting and useful processes in the oxygen-free environment of an animal's intestinal tract. For instance, they can efficiently process plant material into what could become a usable fuel source, or generate compounds that could potentially be used in new medicines.

"My group is interested in turning plant waste into value-added chemicals, fuels and materials," she said.

For this work, O'Malley has been awarded the National Science Foundation's CAREER Award to further explore these microbial communities and their potential to help solve some of today's more pressing challenges.

"I'm honored to receive the CAREER award, especially from the NSF's Systems & Synthetic biology program," she said. "The program emphasizes interdisciplinary approaches that balance natural science discovery and engineered systems. Given how competitive these awards are, I'm happy to count myself as an awardee!"

As O'Malley explains it, the transformation of plant material to fuels, materials and chemicals is typically done by a break down of plant cellulose -- found mainly in the fleshy edible parts -- into sugar. From there it is processed by other microbes into the desired chemical.

The inedible parts of plants are a potential trove of convertible energy as well, according to O'Malley. Utilizing non-food parts of plants would not only provide an additional renewable source of sugar, but also address the competition for space with crops grown for food; this is a tough problem in the bio-based chemical industry, which requires large amounts of land to generate product.

"However, the energy contained in the non-food part of plants is trapped within a mixture of biopolymers like lignin, which requires lots of harsh treatments and powerful enzymes to release the sugars," she said. Processing the tougher parts of plants for cellulose remains a relatively costly and intensive process.

To tackle the problem, O'Malley and her lab turned to the experts: the anaerobic microbial communities in the guts of plant-eating animals, which have evolved to break down the leaves, stems, roots and other, tougher plant parts for the energy required by the herbivore.

"The mixture of microbes inside of herbivore guts harbor plant-degrading enzymes that are largely uncharacterized, and could have direct biotech potential," said O'Malley. "Further, it turns out that these consortia of microbes form partnerships that allow them to degrade plant material in the most optimal way, namely by distributing the chemical byproducts among all the different members to improve breakdown. By learning about these unusual microbes, especially how they partner together, we seek to develop new culture technologies to advance lignocellulosic bioprocessing into value-added chemicals."

The CAREER award, said O'Malley, will allow her and her research group to decipher how nature pairs microbes together, enabling them to build partnerships between microbes that wouldn't normally see each other in nature. "This would open the way for new bioprocessing technologies where multiple microbes become specialists that 'divide and conquer' difficult tasks," she said.