Some things to know about the $3.8 billion, 1,150-mile project that crosses four states. 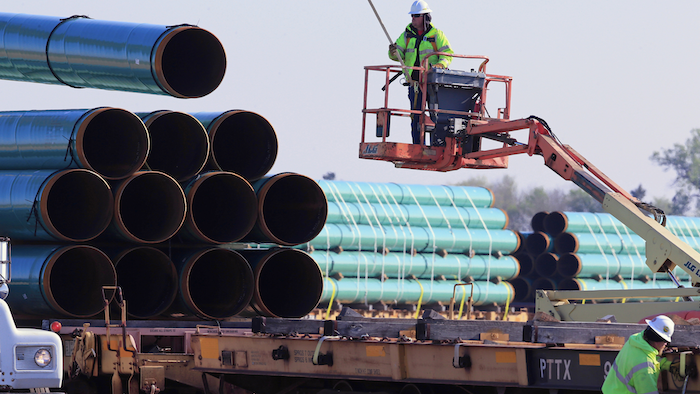 BISMARCK, N.D. (AP) — North Dakota regulators on Wednesday approved the biggest-capacity crude pipelineproposed to date that would move nearly 600,000 barrels daily from the oil patch to Illinois. Some things to know about the $3.8 billion, 1,150-mile project that crosses four states:

The North Dakota Public Service Commission had been reviewing Dallas-based Energy Transfer Partners' permit for 13 months. The three-member, all-Republican panel long signaled support, saying the pipeline would reduce truck and oil train traffic, cut natural gas flaring and create more markets for the state's oil and gas. The commission voted 2-0 to approve the permit; Commissioner Randy Christmann abstained because his mother-in-law has been negotiating an easement for the project.

Energy Transfer Partners hopes to complete the pipeline by year's end. The North Dakota's portion is the longest leg (about 360 miles) and the most expensive ($1.4 billion).

Regulators in South Dakota and Illinois have already approved permits. Iowa still remains, though the company says it expects that approval to come next month. The U.S. Army Corps of Engineers also must approve thepipeline because it would cross beneath the Missouri River twice in North Dakota, near Williston and Mandan.

Energy Transfer Partners says it has easement agreements on 85 percent of the properties along the pipeline'spath, which crosses 50 counties, and will use eminent domain if agreements with landowners can't be reached voluntarily. Easements can bring significant money for landowners: A couple in south-central North Dakota said they signed a 99-year easement worth almost $50,000 to allow a half-mile of pipeline on their farm.

The steel pipeline will vary in diameter from 12 inches to 30 inches and would be buried at least 4 feet below ground — up to 64 feet at Missouri River crossings. The company says it would have safeguards including leakdetection equipment, and that workers who remotely monitor the pipeline from Texas could close block valves on the pipeline within three minutes if a breach is detected.