The Navy is launching a carrier strike group to be powered partly by biofuel, calling it a milestone toward easing the military's reliance on foreign oil. 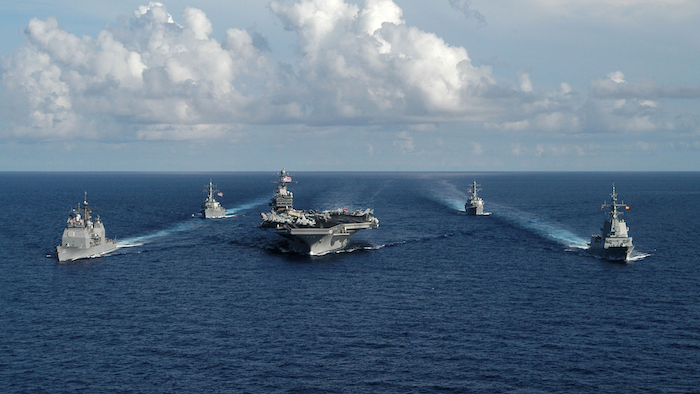 SAN DIEGO (AP) — The Navy is launching a carrier strike group to be powered partly by biofuel, calling it a milestone toward easing the military's reliance on foreign oil.

The maritime branch is touting the warships as the centerpiece of its "Great Green Fleet." Most of the group's ships will be run for now on a mix made up of 90 percent petroleum and only 10 percent biofuels, though that could change in the future. The Navy originally aimed for the ratio to be 50/50.

Meanwhile, critics, including environmentalists, say biofuel production is too costly and on a large scale may do more harm than good.

Navy Secretary Ray Mabus and Agriculture Secretary Tom Vilsack were scheduled on Wednesday to inspect the ships before they set sail off San Diego. They are headed up by the nuclear-powered USS John C. Stennis supercarrier.

Mabus said going green is not just about reducing the Navy's carbon footprint.

"In 2010, we were losing too many Marines in convoys carrying fossil fuels to outposts in Afghanistan, and the prohibitive cost of oil was requiring us to stop training at home in order to keep steaming abroad, a dangerous and unsustainable scenario," he said in a statement.

The Navy is aiming to draw half its power from alternative energy sources by 2020 so ships can refuel less, stay out at sea longer and no longer be at the mercy of fluctuating oil prices and oil-producing nations, which may not all have U.S. interests in mind, Mabus said. The federal government has invested more than $500 million into drop-in biofuels, which can be used without reconfiguring engines.

Vilsack, speaking in Ohio about the rural economy last Friday, said the Navy's efforts offer a huge market opportunity for the biofuel industry. The Defense Department uses 90 percent of the energy consumed by the federal government, spending billions of dollars annually on petroleum fuels to support military operations.

The Navy bought 77 million gallons of the mix at $2.05 a gallon to fuel its ships off the West Coast this year. Some of the biofuel comes from beef fat from the Midwest. Similar contracts are in the works to fuel its ships elsewhere.

The purchase comes after a 2012 demonstration on the Navy's use of alternative fuels drew fire from lawmakers outraged at the $26 a gallon price tag of the 450,000 gallons of biofuel bought for the event. Legislators passed a law prohibiting the Pentagon from buying biofuels in mass unless the price is competitive with that of petroleum.

Retired Navy Capt. Todd "Ike" Keifer, who has published a study on the Navy's plan, said he does not believe the Navy will ever get "any meaningful quantities of cost-competitive biofuels."

"Biofuels sound good, but it turns out that making carbohydrates (biomass) into hydrocarbons (ideal fuels) is a very laborious and wasteful process that is far more costly and much harder on the environment than producing fossil fuels," he said.

Environmental scientist Jesse Ausubel, at The Rockefeller University in New York City, said biofuels are renewable but not green since they require so much land, fertilizer, pesticide and fuel to produce them.

"There are many ways that the fleet could become truly greener — through more efficient propulsion, for example," Ausubel wrote in an email to The Associated Press.

All military branches are looking to cut their ties to foreign oil as part of a national security strategy. Since 2008, the Navy has cut oil consumption by 15 percent since 2008 and the Marine Corps has reduced it by 60 percent.

In 2009, the Navy commissioned its first hybrid ship, the USS Makin Island. The ship's hybrid-electric drive has enabled it to stay out three times longer between refueling than on petroleum alone, and it spent half its normal fuel budget on its first deployment, Mabus said. LED lighting, stern flaps and hull coatings have also helped other ships cut energy use.