Oil executive Harold Hamm says he expects the price of oil to rise to about $60 by the end of the year as drillers in North Dakota, Texas and elsewhere cut production and whittle down the current glut in the market. 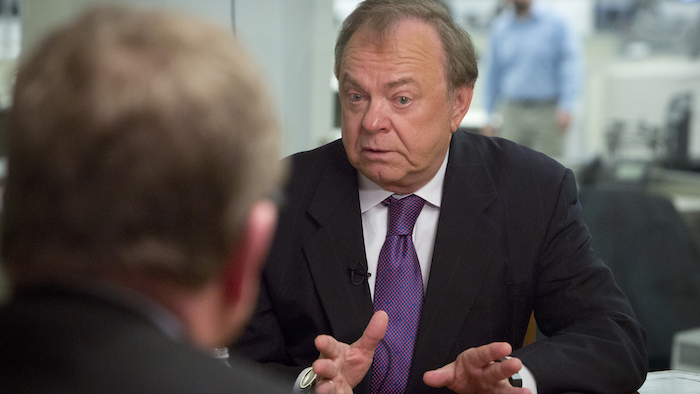 NEW YORK (AP) — Oil executive Harold Hamm says he expects the price of oil to rise to about $60 by the end of the year as drillers in North Dakota, Texas and elsewhere cut production and whittle down the current glut in the market.

Oil fell to $30 this week, a 12-year low, down 72 percent from $107 in June 2014. Hamm, the CEO of Continental Resources Inc., said in an interview Wednesday that he believes oil is at an inflection point, though he wouldn't say the price has bottomed yet.

Hamm's company helped lead a renaissance in the U.S. oil industry through the use of horizontal drilling to free oil trapped in shale rock.

U.S. oil production rose from 5 million barrels a day in 2008 to nearly 10 million in the early part of last year. Combined with OPEC's decision to keep production at high levels, supply eventually outpaced the growth in demand and prices plummeted.

Low oil prices have been a boon to consumers, with average gas prices now below $2. U.S. households saved more than $600 on average at the gas station last year. The Energy Department forecast Tuesday that gasoline would average $2.03 a gallon in the U.S. this year.

Low oil prices have had the opposite impact on investors. The energy sector of the Standard & Poor's 500 fell 23.5 percent in 2015. Oklahoma City-based Continental Resources' stock fell to $19.43 during Wednesday trading, its lowest level since early 2010.

Hamm said the energy sector has great potential and is priced very low, although he acknowledged that it is going "to take some fortitude to come back into the market." He said once investors see energy prices at a bottom, sentiment toward stocks can change rapidly.

Hamm, 70, says that as a result of the return of the U.S. as an oil power and the decline of OPEC's dominance "we're free of much of the chaos" that could influence prices. He noted that in the past, the price of oil would have shot up on news that Iran detained two U.S. boats and 10 sailors. "Was there any impact? No."