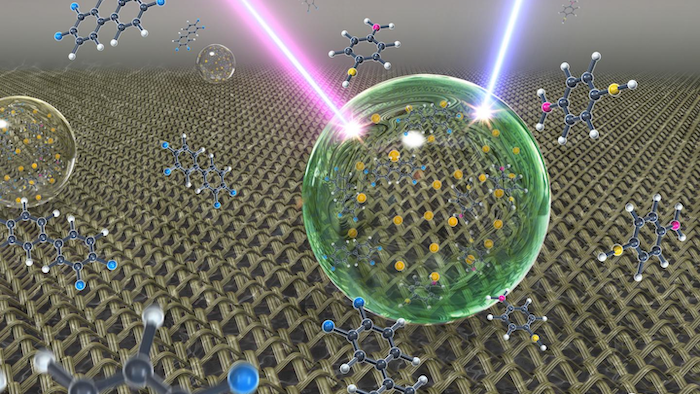 A technique that combines the ultrasensitivity of surface-enhanced Raman scattering (SERS) with a slippery surface invented by Penn State researchers will make it feasible to detect single molecules of a number of chemical and biological species from gaseous, liquid or solid samples. This combination of slippery surface and laser-based spectroscopy will open new applications in analytical chemistry, molecular diagnostics, environmental monitoring and national security.

The researchers, led by Tak-Sing Wong, assistant professor of mechanical engineering and the Wormley Family Early Career Professor in Engineering, call their invention SLIPSERS, which is a combination of Wong's slippery liquid-infused porous surfaces (SLIPS), a biologically inspired surface based on the Asian pitcher plant, and SERS.

"We have been trying to develop a sensor platform that allows us to detect chemicals or biomolecules at a single-molecule level whether they are dispersed in air, liquid phase, or bound to a solid," Wong said. "Being able to identify a single molecule is already pretty difficult. Being able to detect those molecules in all three phases, that is really challenging."

Wong needed the help of postdoctoral fellow Shikuan Yang to combine SERS and SLIPS into a single process. Yang was trained in Raman spectroscopy in the characterization laboratory of Penn State's Materials Research Institute. His expertise in the SERS technique and Wong's knowledge of SLIPS enabled them to develop the SLIPSERS technology. Their work appeared online on December 31, 2015 in the Proceedings of the National Academy of Sciences.

Raman spectroscopy is a well-known method of analyzing materials in a liquid form using a laser to interact with the vibrating molecules in the sample. The molecule's unique vibration shifts the frequency of the photons in the laser light beam up or down in a way that is characteristic of only that type of molecule. Typically, the Raman signal is very weak and has to be enhanced in some way for detection. In the 1970s, researchers found that chemically roughening the surface of a silver substrate concentrated the Raman signal of the material adsorbed on the silver, and SERS was born.

Wong developed SLIPS as a post-doctoral researcher at Harvard University. SLIPS is composed of a surface coated with regular arrays of nanoscale posts infused with a liquid lubricant that does not mix with other liquids. The small spacing of the nanoposts traps the liquid between the posts and the result is a slippery surface to which nothing adheres.

"The problem is that trying to find a few molecules in a liquid medium is like trying to find a needle in a haystack," Wong said. "But if we can develop a process to gradually shrink the size of this liquid volume, we can get a better signal. To do that we need a surface that allows the liquid to evaporate uniformly until it gets to the micro or nanoscale. Other surfaces can't do that, and that is where SLIPS comes in."

If a droplet of liquid is placed on any normal surface, it will begin to shrink from the top down. When the liquid evaporates, the target molecules are left in random configurations with weak signals. But if all the molecules can be clustered among the gold nanoparticles, they will produce a very strong Raman signal.

"First we need to use conductive nanoparticles, like gold," Shikuan Yang explained. "And then we have to assemble them so they make nanoscale gaps between the particles, called hot spots. The molecules bind to the gaps and a very strong electromagnetic field forms. If we have a laser with the right wavelength, the electrons will oscillate and a strong magnetic field will form in the gap area. This gives us a very strong signal."

Although there are other techniques that allow researchers to concentrate molecules on a surface, those techniques mostly work with water as the medium. SLIPS can be used with any organic liquid.

"Our technique opens up larger possibilities for people to use other types of solvents to do single molecule SERS detection, such as environmental detection in soil samples," Yang said. "If you can only use water, that is very limiting. "In biology, researchers might want to detect a single base-pair mismatch in DNA. Our platform will give them that sensitivity."

One of the next steps will be to detect biomarkers in blood for disease diagnosis at the very early stages of cancer when the disease is more easily treatable.

"We have detected a common protein, but haven't detected cancer yet," Yang said.

Although the SLIPS technology is patented and licensed, the team has not sought patent protection on their SLIPSERS work.

"We believe that offering this technology to the public will get it developed at a much faster pace," said Professor Wong. "This is a powerful platform that we think many people will benefit from."