Oklahoma's earthquakes have been linked to injecting wastewater underground from oil and gas production. 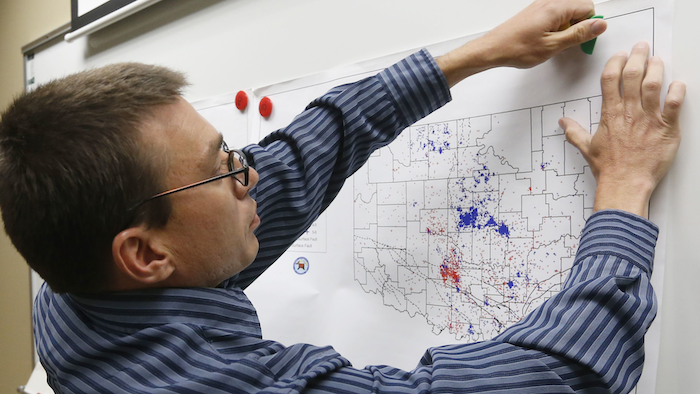 The U.S. Geological Survey reports a magnitude 4.7 quake hit just before 10:30 p.m. Wednesday about 20 miles northwest of Fairview and a magnitude 4.8 quake struck about a half mile away less than a minute later. A magnitude 4.0 quake was recorded in the area just after 2:30 a.m. Thursday.

Oklahoma's earthquakes have been linked to injecting wastewater underground from oil and gas production. Regulators have ordered a reduction in volume or the closure of some wells.

Fairview police and Major County Sheriff's Department officials say there were no reports of damage or injuries.

Hundreds of people reporting feeling the quakes in Kansas and Oklahoma. There were also reports to the USGS that the quake was felt hundreds of miles away in Arkansas, Illinois, Iowa, Mississippi, Missouri, Nebraska, Texas and Wisconsin.

Fairview is about 100 miles northwest of Oklahoma City.

"It was by far the worst earthquake that I've experienced," said Fairview resident Mary Beth McFadden. "The house just tremored for quite some time, and then we had another one right away.

"It was just scary. Nothing fell off the walls, but it was very nerve-wracking for a few minutes."

More than a dozen smaller quakes were also recorded Wednesday night and Thursday.

The Oklahoma Corporation Commission, which regulates the state's oil and natural gas industry, on Monday ordered five wastewater injection wells to reduce volume after a swarm of quakes, including a 4.2-magnitude temblor on New Year's Day, rattled Edmond, a northeast suburb of Oklahoma City.