In the future, they might facilitate the manufacture of various industrial materials and perhaps even serve as vehicles for drug delivery. 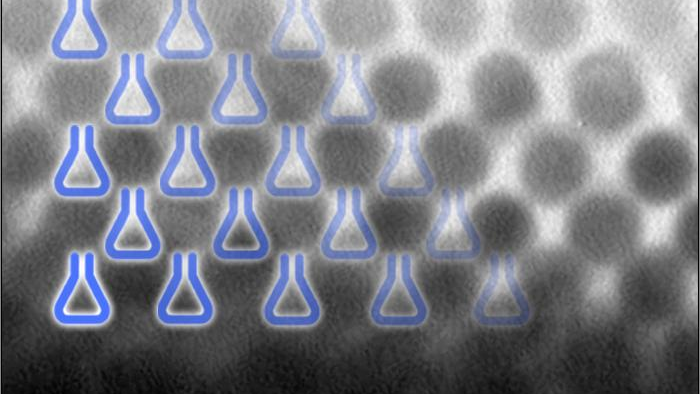 Miniature self-assembling "flasks" created at the Weizmann Institute may prove a useful tool in research and industry. The nanoflasks, which have a span of several nanometers, or millionths of a millimeter, can accelerate chemical reactions for research. In the future, they might facilitate the manufacture of various industrial materials and perhaps even serve as vehicles for drug delivery.

Dr. Rafal Klajn of the Weizmann Institute's Organic Chemistry Department and his team were originally studying the light-induced self-assembly of nanoparticles. They were employing a method earlier developed by Klajn in which inorganic nanoparticles are coated in a single layer of organic molecules that change their configuration when exposed to light; these alter the properties of the nanoparticles such that they self-assemble into crystalline clusters. When spherical nanoparticles of gold or other materials self-assembled into a cluster, empty spaces formed between them, like those between oranges packed in a case. Klajn and his team members realized that the empty spaces sometimes trapped water molecules, which led them to suggest that they could also trap "guest" molecules of other materials and function as tiny flasks for chemical reactions. A cluster of a million nanoparticles would contain a million such nanoflasks.

As reported in Nature Nanotechnology, when the scientists trapped molecules that tend to react with one another inside the nanoflasks, they found that the chemical reaction ran a hundred times faster than the same reaction taking place in solution. Being confined inside the nanoflasks greatly increased the concentration of the molecules and organized them in a way that caused them to react more readily. Enzymes speed up chemical reactions in a similar manner - by confining the reacting molecules within a pocket.

Although clusters of nanoparticles containing empty spaces have been created before, the advantage of the Weizmann Institute method is that the clusters are dynamic and reversible, so molecules can be inserted and released on demand. The clusters self-assemble when nanoparticles are exposed to ultraviolet light, but exposure to regular light causes them to disassemble, so that the same nanoparticles can be reused in numerous cycles. Moreover, the scientists found that by decorating their nanoparticles with a mixture of different chemicals, they could trap molecules inside the nanoflasks in a highly selective manner. For example, from a mixture of spiral-shaped molecules, they could cause left- or right-handed spirals to be trapped, a skill that can be particularly important for drug synthesis.

For future industrial use, the nanoflasks may prove useful in speeding up numerous chemical reactions, such as polymerization reactions needed for the manufacture of plastics. The method might also be applied one day in drug delivery. The drug would be delivered inside nanoflasks to the target organ and released at the required time when the nanoflasks would disassemble upon exposure to light.