The team has met the criteria for naming the synthetic highly radioactive element more than a dozen years after they began working to create it. 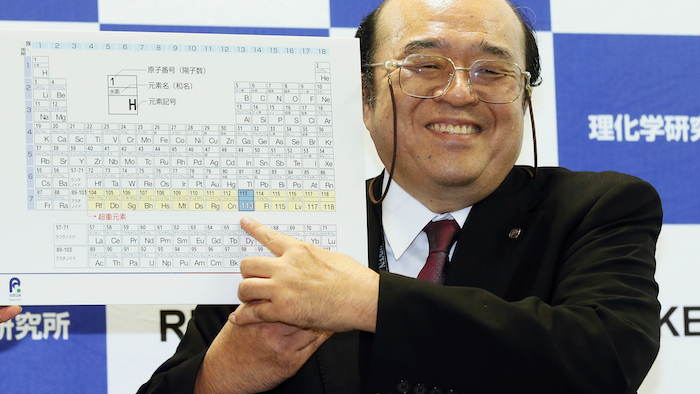 Kosuke Morita of Riken Nishina Center for Accelerator-Based Science points at periodic table of the elements during a press conference in Wako, Saitama prefecture, near Tokyo Thursday, Dec. 31, 2015. (Kyodo News via AP)

A team of Japanese scientists have met the criteria for naming a new element, the synthetic highly radioactive element 113, more than a dozen years after they began working to create it.

Kosuke Morita, who was leading the research at the government-affiliated Riken Nishina Center for Accelerator-Based Science, was notified of the decision on Thursday by the U.S.-based International Union of Pure and Applied Chemistry.

"Now that we have conclusively demonstrated the existence of element 113, we plan to look to the unchartered territory of element 119 and beyond," Morita said in a statement.

A joint working group of the IUPAC and International Union of Pure and Applied Physics also announced decisions on recognition of discoveries of elements 115, 117 and 118.

Discoveries of atomic elements have often involved competition between scientists. The news is a morale booster for Riken, which has undergone a reorganization of some of its research following a scandal over stem-cell research.

"To scientists, this is of greater value than an Olympic gold medal," Ryoji Noyori, former Riken president and Nobel laureate in chemistry told reporters. Kosuke Morita of Riken Nishina Center for Accelerator-Based Science points at periodic table of the elements during a press conference in Wako, Saitama prefecture, near Tokyo Thursday, Dec. 31, 2015. (Kyodo News via AP)

Riken had earlier said japonium might be proposed as a name for element 113, which provisionally had been named ununtrium.

However, Morita has no specific candidates under consideration. He said he planned to spend part of next year considering a name for the element.

The IUPAC group gave collaborating teams from the Joint Institute for Nuclear Research in Dubna, Russia; Lawrence Livermore National Laboratory in California and the Oak Ridge National Laboratory in Oak Ridge, Tennessee the right to name elements 115 and 117. Separately, scientists from the Dubna laboratory and Lawrence Livermore were invited to name element 118.

Element 113 sits between copernicium and flerovium on the periodic table. A joint team of scientists in Russia and the Lawrence Livermore National Laboratory in the U.S. also were vying for naming rights for 113 after announcing its discovery in 2004.

Morita and his group used Riken's linear accelerator and ion separator to search for new synthetic superheavy elements, beginning in the late 1980s. In 2003, his team began working to create element 113 by bombarding a thin layer of bismuth with zinc ions traveling at about 10 percent the speed of light, Riken said.

Isotopes of element 113 have a very short half-life, lasting for less than a thousandth of a second, making its discovery very difficult. After twice succeeding to create it, the group tried for seven years before further success, in August 2012.