The Los Angeles city attorney sued the Southern California Gas Co. on Monday over a six-week-old natural gas leak that has sparked complaints of illness and forced hundreds of families out of a San Fernando Valley neighborhood. 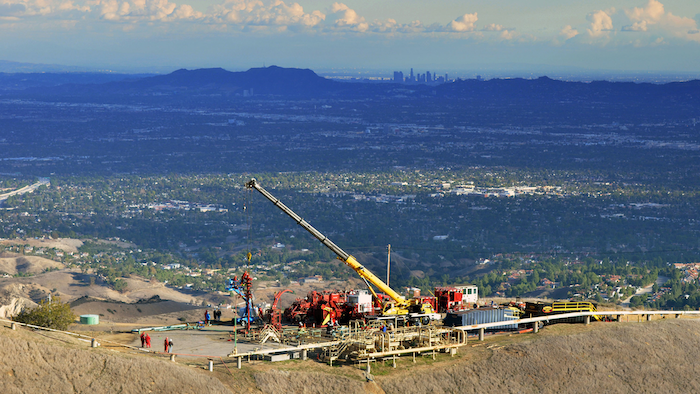 LOS ANGELES (AP) — The Los Angeles city attorney sued the Southern California Gas Co. on Monday over a six-week-old natural gas leak that has sparked complaints of illness and forced hundreds of families out of a San Fernando Valley neighborhood.

The Superior Court lawsuit alleges unfair competition and creation of a public nuisance.

"No community should have to endure what Porter Ranch residents have suffered," City Attorney Mike Feuer said in a statement. "It's not only the odor — it's the potential health issues from long-term exposure to chemicals including benzene; the impact on the daily lives of thousands of families; and the enormous greenhouse gas emissions that remain unmitigated."

The leak began around Oct. 23 with a well failure at the gas company's Aliso Canyon site, where natural gas is stored in a vacant underground oil field. It is believed to be the largest natural gas storage facility in the West and is capable of supplying all of Southern California for more than a month.

The lawsuit contends that the leak in the Porter Ranch area could have been avoided if the gas company had "established and promptly implemented appropriate contingency plans" for a leak. It also alleges the company illegally waited days to notify authorities.

It wants the court to order the leak quickly repaired, plans made to prevent a recurrence, and fine the utility up to $2,500 per day for violations.

The utility has said the field is not at risk of exploding and the natural gas, which is mostly methane, is dispersing and does not pose any health problems.

However, the gas also contains foul-smelling mercaptans, which are added to the odorless gas so that leaks can be detected. Hundreds of people have complained of headaches, nausea, dizziness and nosebleeds.

No evacuations have been ordered, but the gas company, under orders from the Los Angeles County health department, has provided temporary relocation assistance to some families.

At a news conference, Mayor Eric Garcetti said about 700 families have voluntarily left the area and another 1,000 were applying for relocation help.

Dolly Galang, who works for the city attorney's office, said she moved out after suffering vomiting and headaches. "I cannot live in a suitcase," she said at the news conference.

The lawsuit said the leak is releasing an estimated 100,000 pounds of methane an hour into the air. Feuer said the emissions of greenhouse gases are the equivalent of 200,000 cars running for a year.

The leak is an "environmental disaster," Garcetti said.

The utility has issued a public apology and began drilling a relief well last Friday to intercept the well and stop the leak. The job is expected to take three to four months, it said Monday.

The gas leak also sparked a negligence lawsuit last week on behalf of local residents and the group Save Porter Ranch over the alleged release of toxic gases.

Gas company spokesman Javier Mendoza said the company immediately took steps to deal with the leak and inform regulators, and it continues to work with state and local officials. "We understand the leak has created concerns, heightened awareness and public urgency," Mendoza said in a statement.

"SoCalGas has the same urgency and our highest priority is to safely stop the leak as quickly as safety will allow, support the affected customers, and reduce the amount of natural gas emitting into the environment during this unfortunate situation," Mendoza said.