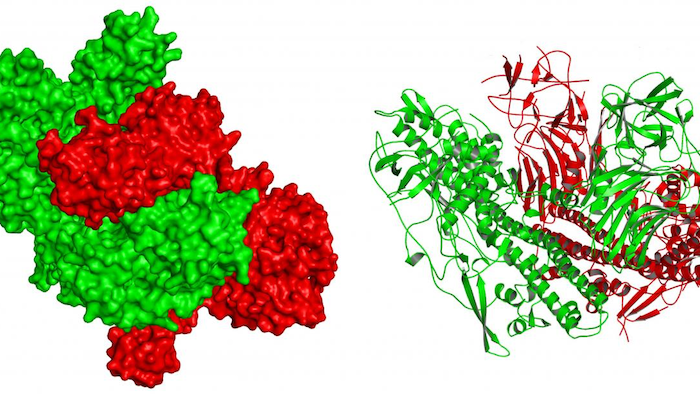 3-D atomic-level views of botulinum neurotoxin type E (green) and the associated protein (red). Left-hand view shows the surface characteristics while right-hand 'ribbon' view shows details of the protein architecture. Detailed biochemical analysis of the structure reveals how the associated protein 'cloaks' the toxin to evade degradation in the acidic gastrointestinal tract, and how the complex disassociates upon entry into the neutral pH bloodstream to activate the toxin.

Scientists at the U.S. Department of Energy's Brookhaven National Laboratory and collaborators at Stony Brook University and the Institute of Advanced Sciences in Dartmouth, Massachusetts, have discovered new details about how "cloaking" proteins protect the toxin that causes botulism, a fatal disease caused most commonly by consuming improperly canned foods. That knowledge and the cloaking proteins themselves might now be turned against the toxin-the deadliest known to humankind-to deliver vaccines or drugs that could prevent or treat the disease. The results appear in the journal Scientific Reports, published online December 7, 2015.

The key discovery was made by deciphering the atomic-scale structure of one form of the toxin bound to an associated protein. To determine these structures, the scientists studied crystallized samples of the bound toxin using x-rays at Brookhaven's National Synchrotron Light Source (NSLS https://www.bnl.gov/ps/nsls30/), a DOE Office of Science User Facility, and electron microscopy.

Though there are seven different types of botulinum toxin, all are released from Clostridium botulinum bacteria as a complex of the toxin plus at least one such associated protein. When people eat contaminated food, the toxin/associated-protein complex stays together in the digestive system, but splits apart to free the toxin once it moves into the bloodstream, where it goes on to disable nerve cells, causing paralysis and death.

"We wanted to know how the toxin is protected, how the complex stays together in the harsh acidic environment of the human gastrointestinal (GI) tract, and how the toxin comes out once it leaves the GI tract and enters the bloodstream," said Brookhaven Lab biologist Subramanyam Swaminathan, lead author on the paper.

The atomic-scale structures reveal the detailed mechanism of how the toxin/associated-protein complex is assembled and stays intact under acidic conditions, and also how it disassociates when it enters the neutral pH conditions of the blood.

The structures also revealed a strong similarity with one of the complexes formed by another botulinum neurotoxin, suggesting that there may be common elements across all seven varieties in the complex stage.

"The active versions of the toxins have quite different structures," Swaminathan said. "So finding any similarities among the seven varieties could help simplify the search for strategies to combat the toxin."

One promising approach, the scientists say, would be to use the toxin's own cloaking system to develop vaccines or drugs. For example, the cloaking proteins might be used to deliver inactive forms of the toxin that could trigger a protective immune response in the bloodstream-in other words an easily administered oral vaccine.

The cloaking proteins might even be able to deliver a drug that could disable the toxin before it has a chance to exert its deadly effects. This would provide an antidote to a deadly toxin that currently has limited treatments.

New treatments would certainly help mitigate the fears of home food canners-not to mention those concerned that botulinum neurotoxin might be used as a weapon of bioterror.