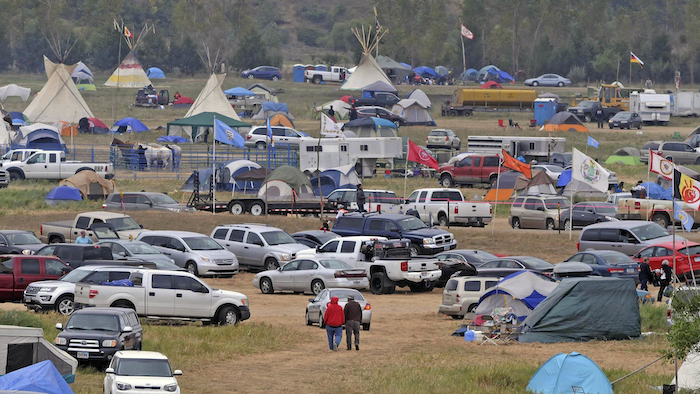 The lawsuit alleges that the pipeline, which would be placed less than a mile upstream of the reservation, could impact drinking water for more than 8,000 tribal members and millions who rely on it downstream. There also have been skirmishes between protesters and private security guards on private land, where the tribe says construction has disturbed ancient sacred sites.

North Dakota's governor said Thursday that a handful of National Guard members will help provide security at traffic checkpoints near the protest site, and another 100 will be on standby.

Some things to know about the pipeline and the tribe's ongoing protest:

Owned by Dallas-based Energy Transfer Partners, the $3.8 billion, 1,172-mile project would carry nearly a half-million barrels of crude oil daily from North Dakota's oil fields through South Dakota and Iowa to an existing pipeline in Patoka, Illinois, where shippers can access Midwest and Gulf Coast markets.

WHAT IS THE LAWSUIT TARGETING?

The tribe sued federal regulators for approving the oil pipeline, challenging the U.S. Army Corps of Engineers' decision to grant permits at more than 200 water crossings. Filed on behalf of the tribe by environmental group Earthjustice, the suit says the project violates several federal laws, including the National Historic Preservation Act, and will disturb sacred sites outside of the 2.3-million acre reservation.

IS THE PIPELINE SAFE?

ETP says the pipeline includes safeguards such as leak detection equipment, and workers monitoring the pipeline remotely in Texas could close block valves on it within three minutes if a breach is detected.

CAN YOU DESCRIBE THE PROTEST?

Since April, a nonviolent tribal protest by mostly members of the Standing Rock Sioux tribe has been set up at a "spirit camp" at the confluence of the Cannonball and Missouri rivers in the path of the pipeline.

It's grown considerably, as they've been joined by other American Indians and non-Native Americans from across the country, including "Divergent" actress Shailene Woodley.

But the protest has become heated, with nearly 40 arrested, including Standing Rock Sioux Tribal Chairman David Archambault II. None of the arrests stemmed from Saturday's confrontation between protesters and construction workers.

Gov. Jack Dalrymple on Thursday activated the North Dakota National Guard ahead of U.S. District Judge James Boasberg's impending federal ruling. A handful of soldiers will help provide security at traffic checkpoints near the protest site, and another 100 Guard members will be on standby if needed to respond to any incidents.

WHAT ABOUT CULTURAL SITES?

It led to Saturday's clash between protesters and private security guards hired by the pipeline company. Law enforcement officials said four security guards and two guard dogs received medical treatment, while a tribal spokesman countered that six people were bitten by guard dogs and at least 30 people were pepper-sprayed.

On Tuesday, Boasberg partially granted the tribe's request to temporarily stop work near Lake Oahe to prevent the destruction of more sacred sites, but not on the private land that sparked the protest.

ARE THERE PROTESTS ELSEWHERE?

Yes, but nothing like in North Dakota. Construction equipment at several sites in Iowa was set on fire earlier in August, causing more than $1 million in damage.

WHY IS THE PIPELINE BEING BUILT?

Announced in 2014, supporters said the pipeline would create more markets and reduce truck and oil train traffic — the latter of which has been a growing concern after a spate of fiery derailments of trains carrying North Dakota crude.