Nissan's chief executive said the automaker was headed toward a recovery. 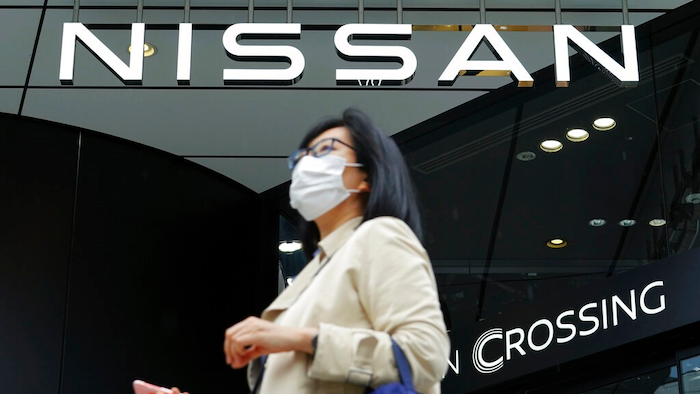 A woman walks the Nissan automaker's showroom in Tokyo Tuesday, May 11, 2021. Nissan reported Tuesday, Nov. 9, 2021, a 54.1 billion yen ($479 million) profit for the July-September quarter, a reversal from the 44 billion yen loss racked up last year, despite the continuing damage from the computer chip sshortage slamming the auto industry.
AP Photo/Eugene Hoshiko, File

TOKYO (AP) — Nissan reported a profit for the July-September quarter, managing to reverse earlier losses despite challenges that include shortages of computer chips and rising costs for materials.

Quarterly sales edged up 1% to 1.94 trillion yen ($17 billion), as Nissan Motor Co. vehicle sales rose in Japan and the rest of Asia, while declining in North America and Europe.

Chief Operating Officer Ashwani Gupta began his presentation by apologizing to customers for disruptions to deliveries of products because of the chips crunch, which has affected all the major automakers including Toyota Motor Corp.

“Our customers are waiting,” said Gupta, adding that Nissan hoped to boost its market share. “The more we can produce, the more we can sell.”

The company raised its profit forecast for the fiscal year ending in March to 180 billion yen ($1.6 billion) from an earlier 60 billion yen ($531 million).

Gupta said the upward revision in Nissan's profit outlook was despite an expectation that sales for the year will total 3.8 million vehicles, down from an earlier estimate of 4.4 million vehicles.

The Japanese maker of the Leaf electric vehicle, Z sportscar and Infiniti luxury models has been battling a tarnished brand image after the arrest three years ago of its then-Chairman Carlos Ghosn on charges of under-reporting his future compensation.

Ghosn fled Japan for Lebanon while out on bail. He and another executive arrested and tried for his alleged involvement, American Greg Kelly, say they are innocent. A verdict on Kelly's case is expected next year.

Nissan, based in the port city of Yokohama, sank into a loss of 448 billion yen for the fiscal year that ended in March 2021, its second straight year of red ink.

“Our strong results are the outcome of diligent financial management, improved quality of sales and a continuing product offensive. This has helped us withstand several headwinds,” Uchida said.