Edmunds: How to Calculate an Electric Vehicle's Charge Costs

It can vary wildly depending on when and where you charge it. 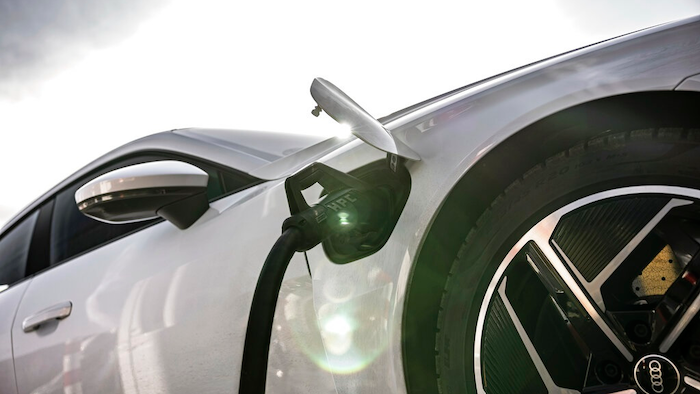 This photo provided by Audi shows the automaker's new all-electric production car, the 2022 e-tron GT, charging up at one of many public charging stations.
Hendryk Meyer/Courtesy of Audi via AP

One of the challenges people have with electric vehicles is figuring out how much they cost to operate. The price of fully charging an electric vehicle’s battery can vary wildly depending on when and where you charge it. For the bigger picture, you should also include the amortized cost of buying and installing a home charging station and the rates your utility company charges.

Here’s how to calculate what it will cost to charge your EV, as compiled by Edmunds’ experts.

When you’re shopping for a gasoline-powered car, you pay attention to how many miles per gallon it gets. For plug-in vehicles, the window sticker and the government’s fueleconomy.gov website will have a big EPA-estimated mpg equivalent figure. But this isn’t a useful metric for determining cost. A battery stores energy in kilowatt-hours, much like a gas tank stores fuel in gallons.

Instead, look for the amount of energy an electric car consumes, which is measured in kilowatt-hours per 100 miles (kWh/100 miles). This value tells you how much energy in kilowatt-hours a vehicle would use to travel 100 miles. Note that this is just the government’s estimate; your EV’s actual consumption can vary because of your driving style and environment.

Cost for charging at home

The cost of electricity is more stable than the cost of gasoline, but that cost varies state by state. According to the most recent data, the residential average per kilowatt-hour ranges from 9.9 cents in Idaho to 32.3 cents in Hawaii. The national average is 13.3 cents, which is only about 2 cents more than it was a decade ago. To find your state’s average, check this state-by-state list of the average cost per kilowatt-hour.

Your state’s average is just that, however. What you pay is determined by your utility company and the plan you use. Electricity cost usually rises with your consumption and varies depending on the time of use. A kilowatt during the day at peak hours or at month’s end is likely to cost more than one during nighttime off-peak hours or at the beginning of the month. Look at your latest utility bill or check your utility’s website to see the current rates.

To estimate your cost of charging at home, multiply your vehicle’s kWh/100 miles figure by the electric rate for the time of day you’ll most often be charging. That figure will tell you the cost per 100 miles.

Here’s an example: Let’s say you own a 2021 Tesla Model 3 Standard Range Plus — it gets an EPA-estimated 24 kWh/100 miles — and your utility’s pricing plan starts at 18 cents per kWh and rises to a maximum of 37 cents per kWh. As such, it would cost as little as $8.64 to recharge at home after driving 200 miles or potentially $17.76 if you recharged during your utility’s peak rates.

Besides understanding what it will cost to power an EV, it’s also important to know the cost of the charging equipment itself. Technically, the vehicle’s “charger” is actually built into the car.

That box with the colored lights, long cord and connector plug that you hang on the wall of your garage or carport is properly known as the “electric vehicle supply equipment” or EVSE. But it’s OK if you call it a car home charging station or an EV charger — almost everyone does.

Most vehicle automakers have a preferred charger provider, but there are dozens of companies selling EVSEs. A search online will help you find the features, power output and pricing that best suit your needs. Just search for “EVSE” or “EV home chargers.” Prices for a good 240-volt Level 2 home system can range from just under $200 to more than $1,000 before installation. Some of these systems can report exactly how much electricity you use to charge your vehicle.

Installation costs for EVSEs vary by region, depending on such factors as local labor rates, materials used, and government permit costs and requirements. The biggest variable is typically permit costs. National average costs for a wall-mounted EVSE can range from $850 to $2,500.

EV charging is unfamiliar territory for anyone raised in a gas-car culture. But if you spend just a little time getting familiar with how it works and what’s involved, figuring out your charging costs will eventually be less work than driving to a pump. And cheaper too.